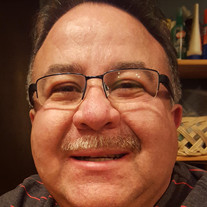 Louis grew up in Albuquerque, New Mexico. He attended Pajarito Elementary School, Polk Middle School, and graduated from Rio Grande High School. He further received a Bachelor’s degree in Business Administration from the College of Santa Fe in 1994. Married, Naomi Armenta, June 27, 1993 in Albuquerque, New Mexico. Louis moved to Parker, Colorado in 1997 to enrich the lives of his family. After 31 years of faithful service at Quest/ Century Link, he found a respite in retirement at the age of 49. His retirement offered him the opportunity to embark on many adventures abroad for nearly 2 years. Yet, his desire to remain busy led him to a new job at the local Lowe’s Home improvement store. Of note was his love for travel, hiking, camping, landscaping and truly any activity that included the outdoors. His ever-eager interest in new and exciting places brought him and his family across the country and globe. Any activity that he thought might bring his family closer together garnered the biggest smile. Louis’ sense of adventure was one of the defining hallmarks of his life. He is survived by his wife Naomi Armenta, sons Matthew Armenta, Mark Armenta, daughters Ashley Pierce, Victoria Armenta, parents Gregory Armenta, Pauline Armenta, brothers Robert Armenta, Jimmy Armenta, sisters Ruby Torrez, Irene Armenta, Belinda Mock and many aunts and uncles. Finally, his special canine friends Libby and Blue. Service will be Saturday, June 24, 2017 at Parker Evangelical Presbyterian Church at 6 PM with a small gathering to follow. Louis was a major advocate of Bonfils Blood Bank and a regular donor. He was also very involved with Boy Scouts of America- Denver Council. As such, in leu of flowers or gifts, a donation to either of these organizations would be greatly appreciated.

The family of Louie M. Armenta created this Life Tributes page to make it easy to share your memories.

Louis grew up in Albuquerque, New Mexico. He attended Pajarito...

Send flowers to the Armenta family.