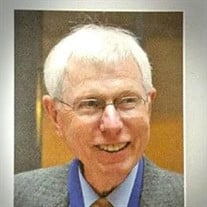 Straffon, Lloyd H. "Bud" May 31, 1938 - May 4, 2018 Lloyd H. “Bud” Straffon passed away May 4, 2018 in Highlands Ranch, Colorado. He was born May 31, 1938, the son of Florabelle and Lloyd Straffon. An active Boy Scout growing up in Croswell, Michigan, Bud attained the rank of Eagle Scout and attended the U.S. World Jamboree. He was a member of the University of Michigan Football Wolverines in the late 50s, but sustained a knee injury that limited his opportunity to play in any games. After receiving his DDS Degree from the University of Michigan, Bud spent two years as a Captain in the Army Dental Corps, after which he earned his MS Degree in Pediatric Dentistry in 1967. For the next 29 years, he both operated a private pediatric dental practice in Bloomfield Township and served as a Research Associate in the School of Dentistry. In 1969 he added the position of Assistant Professor at the U of M Dental School where he gave lectures, conducted research and taught. Bud was the first director of the new Pediatric Dental Clinic at Mott Children’s Hospital (1970-71), was promoted to Associate Professor (1975), full Professor (1980) and Professor Emeritus (2006). Bud was appointed the director of the graduate program in pediatric dentistry from 1990-1993, director of the pediatric dental clinics from 1993-2003 and finally served a second time as director of the graduate program from 2003-2005. His career brought him numerous honors, including being named Diplomat of the American Board of Pediatric Dentistry (1970), co-recipient of the Award for Excellence in Literature from the Journal of the American Society of Dentistry (1973), election to the American College of Dentists (1981), the position of President of The Michigan Academy of Pediatric Dentistry (1981-82), serving on the Editorial Board of the Journal of Pediatric Dentistry (2001-05) and President of the local Chi Chapter of the Omicron Kappa Upsilon Honorary Society (2005-06). During his illustrious career, Bud published more than 60 scientific articles, while also lecturing both nationally and internationally, before retiring in 2006. Ever the avid outdoorsman, Bud enjoyed hiking, camping and skiing with his family, along with time on tennis courts and golf courses, but one of his favorite activities was canoeing in Canada. In retirement, he developed a love for painting, using oil as a medium and also wrote a book detailing his father’s life in Croswell and the Straffon Hardware Store which originated in 1888. An endless challenge was to coerce his beloved orchids to leave their dormant stage and bloom again. Bud is survived by his wife, Ruta; sons Derek (Stacie) and Kristofer (Lisa); grandchildren Savannah, Tye, Chase and Fletcher; and sister, Nancy Wilson. Memorial Service Location: Central Presbyterian Church 1660 Sherman Street Denver, CO 80203 P: 303.839.5500 www.centraldenver.com A wish of our father, was to continue his love for pediatric dentistry, further opportunities in education, and support the University of Michigan’s Pediatric Department. In lieu of flowers, donations can be made in memory of Dr. Lloyd “Bud” Straffon to the University of Michigan School of Dentistry, Pediatric Dentistry Gift Fund. https://leadersandbest.umich.edu/find/#!/give/basket/fund/363764 A memorial service will be held June 23 in Denver CO at 10am.

The family of Lloyd H. Straffon created this Life Tributes page to make it easy to share your memories.

Send flowers to the Straffon family.