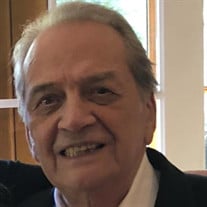 Lew, age 85, peacefully passed away on October 23rd in Centennial, Colorado. Lewis was born on September 24, 1935 in Rockford, IL to Pietro and Francis (Caruana) Scifo. He graduated from East Rockford High in 1953. He attended the University... View Obituary & Service Information

The family of Lewis Peter Scifo created this Life Tributes page to make it easy to share your memories.

Lew, age 85, peacefully passed away on October 23rd in Centennial,...

Send flowers to the Scifo family.