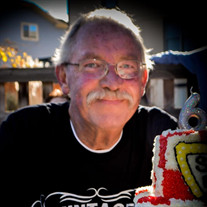 Lewis Scott Morris, Jr., Age 62, passed away peacefully at his home in Littleton, CO on February 23, 2021, surrounded by his loving family. He was born October 12, 1958 in Denver, CO to Lewis S. Morris and Juanita J. (Morgan) Morris. He was the youngest of 6 Children. He was known to everyone as Scott. Scott lived in Denver most of his childhood years. He resided in Littleton, CO for 31 years raising his children. He married Christine Long in 1980 and was divorced in 1981. They had one son Michael T. Long. Then he met the love of his life. Scott and Teresa Gertje were married in April 1987 and their adventures had just begun. Along with his son Michael they were blessed with three more children Keeley, Brandon and Kyle. Scott had many jobs growing up including; Pizza Hut, Aurora Drive In, auto mechanic and elevator repair. He then discovered telephones and began installing and repairing telephone lines. In the early 1990’s he had his own business, Morris Communications and installed many office phones throughout Metro area. He worked several independent telephone companies until finally being hired in 2000 by US West (CenturyLink). He was a Customer Data Technician and worked in maintaining cable lines underground and over head. In 2019, Scott retired from CenturyLink after 19 years of Service and 40 years total in communications. Scott enjoyed working on his 1956 Chevy Bel Air and had rebuilt his dream muscle car a 1971 Ford Torino GT. His favorite pastime was joining in on local car cruises and speaking to other car enthusiasts. He loved his music from the 50s, 60s, and 70s, especially Bob Seger. He enjoyed trips to Talladega and Las Vegas to watch Nascar live. When he retired he started fishing and took up gold panning. He loved being outdoors. He enjoyed his family immensely. Always celebrating birthdays, holidays and hosting barbecues for family and friends. He would organize family pie nights and family reunions. Family was everything to him. Scott knew no strangers and eventually his family would become so much bigger. Scott is survived by his wife, Teresa and his children Michael Long, Keeley (Casey) Morris, Brandon (Kelsey) Morris, Kyle Morris (Kassie). Grandfather of 6, Celestina, Michael(Selena), Damien, Malerie, Angel and Jackson. He has 5 great grandchildren. Brother of Toni Rose, George (Gina)Kuwamura, Marlene(Sid) Cook, Cindy Morris and Kathy(Henry) Lucero. Step Brother to Greg Corwin, Carole(Shelley)Corwin and Christopher(Dena)Corwin. Brother -in -law to Micheal, Anthony, Christopher (Tony), Tiffany Gertje. He is survived by his mother –in-law Frances Kay Gertje and several nieces and nephews and cousins. Preceded in death by his parents, Lewis S. Morris, Juanita J. Morris-Corwin, brother Robert Burrows and father- in- law Pius Gertje. In Scott’s own words about his life “It’s been a Great Ride!” Celebration of Life will be held on October 10th, 2021. Place and Time TBA

Lewis Scott Morris, Jr., Age 62, passed away peacefully at his home in Littleton, CO on February 23, 2021, surrounded by his loving family. He was born October 12, 1958 in Denver, CO to Lewis S. Morris and Juanita J. (Morgan) Morris. He was... View Obituary & Service Information

The family of Lewis Scott Morris Jr. created this Life Tributes page to make it easy to share your memories.

Lewis Scott Morris, Jr., Age 62, passed away peacefully at his...

Send flowers to the Morris family.