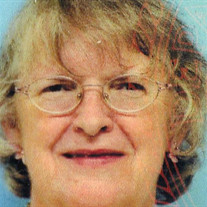 February 18th 1947 – April 30, 2019 Lelia Aileen Darnall, 72, passed away April 30th, at Sunrise at Pinehurst assisted living home in Denver, Colorado. She was survived by sister, Linda Kissell, Brothers James, Tim, Terry and Ron. Nieces Katie, Julie, Betty and Lena, and nephews Justin and Jordan. Lelia was born in Cheyenne Wells, Colorado, the second child of James and Carol Darnall. The family moved to Denver in 1950. Lelia graduated from Englewood High School in 1965. She then joined the Air Force and went to boot camp in San Antonio, Texas. After boot camp there were no jumps she had signed up for, she was honorably discharged. She held a small job for a publisher and then was accepted into the FBI. She first worked in Washington DC She used the FBI to live around the United States. While working for the FBI, she has lived in Las Vegas, Nevada, Anchorage, Alaska, Colorado Springs and back home to Denver. Lelia retired from the FBI with almost 42 years of service. Lelia loved all holidays, especially Saint Patricks day and Easter. She must have had a little bit of Irish in her. She like to have nieces and nephews over to celebrate holidays. She sent cards full of holiday themed items. Lelia liked to crochet, knit and sew. She was a member of the Denver Museum of Nature and Science, the Botanical Gardens and Hudson Gardens. Lelia took in and enjoyed the company of her cat, Feather. In lieu of flowers, tributes to Lelia may be made by donating in her name to the Heart Association or MAX Fund for animals. Thank you.

The family of Lelia A. Darnall created this Life Tributes page to make it easy to share your memories.

Send flowers to the Darnall family.