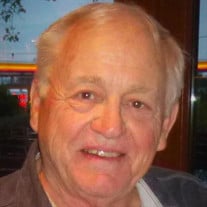 CWO-4 Lawrence H. Herzig (U.S. Army Ret.), 84, of Castle Pines, CO, died Friday, August 14, 2020, at Legacy Village of Castle Pines with family by his side. Larry is survived by his wife of 44 years, Joan (Pellerin) Herzig; a daughter, Catherine (Herzig) Crowley and her husband Ralph of Leominster, MA; a son, Philip Herzig and his wife Holly of Mesa, AZ; a sister, Linda (Herzig) de Laveaga, of Star, ID; two stepsons, Rob Matson and his wife Elizabeth of Castle Rock, and Glenn Matson and his wife Stephanie of Las Vegas, NV; a stepdaughter, Elizabeth Van Vechten and her husband Brian of Castle Rock; 14 grandchildren and 7 great grandchildren; a niece and a nephew; and his dog, Lexi. He was predeceased by his father, Elgin Herzig, in 1973; his mother, Doris (Reynolds) Herzig, in 1974; and his brother, Russell Herzig, in 2013. Larry was born to Elgin and Doris of Pittsfield, MA, in 1936. Before graduating from Pittsfield High School in 1954, Larry was a two-time all-Berkshire and all-Western Massachusetts guard in football, a standout sprinter and shot-putter in track and field, a top-ranked speedskater, and a letterman in hockey and baseball. He attended prep school at Williston Academy in Easthampton from 1954 to 1955, where he again starred on the gridiron, on the track, and in the pit. He attended Stetson University in Deland, FL, from 1955 to 1956, where he played fullback until a knee injury ended his playing days. He would later earn his associate's degree from Mt. Wachusett Community College in Gardner, MA. Larry enlisted in the U.S. Army in 1958, attending basic training at Fort Dix, NJ. After several years in the enlisted ranks, he entered the warrant officer ranks after earning his aviator wings as a helicopter pilot. He would serve two tours in Vietnam, flying Hueys his first tour and Cobras his second. His awards included the Bronze Star, the Distinguished Flying Cross, the Air Medal with "V" device, the Air Medal with 32nd award, and the Army Commendation Medal with second Oak Leaf Cluster. He would also receive a Purple Heart. His tours of duty included France, Texas, Massachusetts, then-West Germany, Hawai'i, and eventually Colorado, where he would retire from the service in 1984 with more than 26 years of steadfast service. Thereafter, he worked mostly as an independent contractor until 2015. Larry was an avid reader who enjoyed golfing, bowling, crossword puzzles, painting, music, travelling, playing with his family members, testing his vast knowledge during Jeopardy, and rooting for the New England Patriots. He was intelligent, articulate, witty, selfless, and the epitome of a patriot. Above all, he was a devoted family man, a loyal son and brother, and a trustworthy friend who will be missed immensely. An Informal reception will be held at Rob's home following the burial. 745 Stonemont Court, Castle Pines CO 80108

The family of Lawrence H. Herzig created this Life Tributes page to make it easy to share your memories.

Send flowers to the Herzig family.