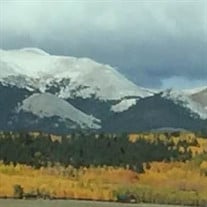 Kim Ambrose McGovern, “Mac”, 76, Denver, Colorado passed away on June 16, 2018 from a longtime illness. Born January 21, 1942 in Columbus, Ohio, the youngest of four children to Arthur and Philomene McGovern. Kim grew up in Columbus and attended Catholic schools there. He graduated from John Carroll University in Cleveland and enlisted in the Navy. He served as an intelligence officer on a naval aircraft carrier in the Mediterranean Sea during the Vietnam War. In the early 70’s he was an instructor assigned to Lowry Air Force Base in Denver. He loved being in Denver and decide to make it his home. It was there that he met and then married Carol Pritchard in June 1973. He retired from the Navy and went into commercial real estate. Kim enjoyed cheering on the Broncos, playing bridge and poker, swimming and raising their three children. He was known to be kind to all and had a great sense of humor. “Punny jokes” were his favorites. He loved his family and exhibited a positive attitude and strength fueled by his unwavering faith in God. Kim is survived by his wife, Carol; son, Matt (Jillian) McGovern and three grandchildren Ava, Kieran, and Charlize McGovern; daughter, Marcy McGovern; and son, Kevin McGovern; brother, Kevin Sr. (Norma) McGovern; sister-in-law Aggie MacKinnon; sister-in-law and brother-in-law, Kay and Ron Sitzmann; and many nieces and nephews. He was preceded in death by parents, Arthur F. and Philomene McGovern; stepmother, Helen MacKinnon McGovern; sister, Aileen Doyle; brother, Rev. Art McGovern S.J.; step-brother Joe MacKinnon; step-sister, Joan Loomis; and brother-in-law Bill Doyle. The Funeral Mass for Kim will be held on Friday, September 21, 2018 at 10 a.m. at Risen Christ Catholic Parish, 3060 S. Monaco Pkwy., Denver, CO 80222. Memorials in Lieu of flowers are encouraged to the charity of your choice, in loving memory of Mr. Kim McGovern.

The family of Kim A. McGovern created this Life Tributes page to make it easy to share your memories.

Send flowers to the McGovern family.