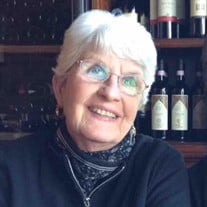 Kay was born in Iron Mountain, Michigan on May 17, 1937 to George Henry and Lucille Alice Marie Ekstrand Wilson. She was the middle of two sisters...Janet Evelyn Wilson Israelson and Lou Ann Wilson Heuer. She sadly passed away April 22, 2021 in Littleton Colorado. In 1958 Kay earned her Registered Nursing license in Dixon, Illinois. While in training, she met her life long friend Marge. Neither Kay nor Marge had ever been to Colorado, however they still chose to relocate to Colorado from only the recommendation and found love of the state, from Kay’s Father, George Wilson. Once in Denver, Kay began to work at Presbyterian Hospital where she later retired from. Kay met her soon-to-be husband in Denver, Colorado...Harold (Hal) Rolland Peirce Jr., a Denver native. The two were married in August of 1961 and in 1962, their daughter Laura Lee Peirce Bahl was born. In 1965 Kay and Hal bought their first house in Denver, and Kay postponed working at the hospital to be an at-home mom. She certainly needed to be at home, because In 1968, their son Bradley Allan Peirce joined the family, who was a handful. In 1972 the family moved to Littleton, Colorado and Kay continued to stay at home with the kids while Hal worked as a Real Estate agent and later as an Engineer at Martin Marietta. In 1978 Kay returned to work at Presbyterian Hospital in the surgery department. There, Kay found pride in her life saving work as she was an integral member of the surgical ‘Heart Team’. Kay worked in assisting the anesthesiologists as well. In 1982, Kay’s husband, Hal, died unexpectedly. Kay stayed strong and marched on to continue to provide for herself and her son. In 1988, Kay’s daughter, Laura and her husband Vince, gave Kay her first grandchild, Christopher (Topher) George Bahl. Kay began her retirement in the early 90’s, which allowed her to be a full time grandmother...the most satisfying job of her lifetime. Kay’s grandson Alexander (Xander) Joseph Bahl was added to her grandparting joy in 1993. Upon Kay’s displeasure, her grandsons, Laura and Vince, moved to New Hampshire in 2000. However, Kay didn’t let that stop her as she was able to visit the family annually between mid November and the Super Bowl. Although Kay did not get to meet her only great-granddaughter Taylor, she enjoyed many photos and stories of the baby. Even though Kay enjoyed being alone, she spent time at the gym where she exercised with her good friend Doug Cady and their workout gang. For more years than can be counted, Kay’s long standing neighbors and lifetime friends, Jim and Gerry O’Leary, were always there to assist when she was in need. But most of all Kay loved her time with her children. Kay often enjoyed lunches out, home improvement jobs, daily chores and attending Bronco games with her son Brad. Kay had many opportunities to travel with her children. Her favorites included European cities, an Alaskan cruise and wild Kodiak bear viewing on Kodiak Island, a trip to New York City at age 75, and her last trip to Utah to view wild horses on her 80th birthday. Kay’s dislikes included: Purple...she hated the color and was very vocal about it, and she had an intense dislike (fear) of both birds and cats. Kay’s likes included: The Denver Broncos, chocolate, The Queen and all things Royal, Bourbon and 7up with a wedge of lime, rye bread with butter, pasties, High Tea at the Brown Palace (or anywhere), romance novels, Lifetime channel movies, surviving lung cancer, telling stories about her surgical nursing career, telling stories of her children (mostly how challenging Brad was), fresh flowers and the Colorado mountains. She mostly looked forward to spending time in Estes Park, Colorado while viewing wild elk, and Mother’s Day Brunch every year at the legendary Stanley Hotel. Kay enjoyed her early Colorado years in her 1968 Avocado Green Cougar (which she was known for drag racing when provoked by teenagers and was stopped by Police on occasion to inquire about her car). Kay often used the horn on her beloved car...once pushing so hard, she broke it. Kay will be remembered as a loving sister, friend, mother and grandmother...we are already missing you Kay (Mom, Mother, Grandie), rest in peace beautiful lady!

Kay was born in Iron Mountain, Michigan on May 17, 1937 to George Henry and Lucille Alice Marie Ekstrand Wilson. She was the middle of two sisters...Janet Evelyn Wilson Israelson and Lou Ann Wilson Heuer. She sadly passed away April 22, 2021... View Obituary & Service Information

The family of Kay Elizabeth Wilson Peirce created this Life Tributes page to make it easy to share your memories.

Send flowers to the Peirce family.