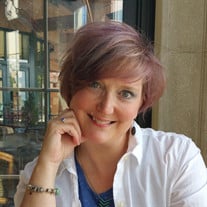 Kara Michelle Askar, 46, of Highlands Ranch, CO, passed away unexpectedly on Monday evening, May 13th, at Sky Ridge Medical Hospital in Lone Tree, CO. Kara was a bright light in this world with an infectious, boisterous personality that could light up a room - there’s no chance you would ever forget having met her. She loved her family, friends, coworkers, patients, doctors and pets, especially dogs. She was beautiful inside-out, fun, thoughtful, giving, outgoing, and humorous with amazing people skills and an intelligence and courage to tackle just about anything. If there’s something you needed she had your back. If you worried about something she was going to check on you. If something needed to get done she owned it. If something could be improved she was going to find a way to improve it. Kara was fully engaged in her children’s lives, they were her greatest joy - always available for their needs and was her husband’s rock, soulmate and best friend. We’re all going to miss her tremendously and will forever have a hole in our hearts. She was the most amazing wife and mother and a strong 6 year breast cancer survivor who supported others and leaves behind her marks of love and warmth in her home of everything so Kara: beauty, life, color, creativity, organization and tidiness. She was born on September 26th, 1972 in Little Rock, AR, the first daughter of Paul and Jeanne Ebaugh then moved to her hometown in Cape Girardeau, MO. She grew up as a quiet kid but an avid swimmer where she spent many summers lifeguarding and teaching swim lessons. She also participated on the swim team for many years where she excelled in the butterfly stroke. Kara’s family was very close to her paternal grandparents, Paul and Gayle, and most of her cousins, uncles and aunts. She also inherited her lifelong fascination with books from dad and granddad, whom she both adored. Young Life and church youth group were also a big part of Kara’s life, greatly improving her self-confidence into the outgoing personality with a strong spirit for adventure and care toward others. She graduated from Central High School in 1990, and then from SEMO University in 1995 with a BSN where she was also proud to be in the ADPi sorority. Kara began her nursing career at a hospital in Little Rock, AR living with her Uncle Darby and Aunt Debbie before venturing out as a traveling nurse spending 3 months at each location. She enjoyed living in many places from Casper, WY to Albuquerque, NM to San Diego, CA to Palm Springs then L.A. in 1999 where she met her future husband, Ron Askar in his hometown Burbank. They took a leap of faith on a first date after meeting online through divine intervention in a Yahoo chat room. They were married 2 years later on April 28, 2001 in Cape Girardeau, MO. Knowing they wanted to get into a house and start a family, Kara took one last travel assignment to Denver, CO (2002), where she and Ron planted their roots and built their dream house for their future family. Kara continued her nursing career at the Medical Center of Aurora South for the next 12 years as a night ICU nurse. In 2007 they adopted their first child Kailey from China, returning again for a son, Brennan in 2011. Around fall of 2012, she switched jobs to the Centrum Surgery Center to have more time with her family, where God also took her to have the best care from her coworkers as a breast cancer patient. She excelled as a PACU, pre-op, and pain nurse, then even signed on as their certified BLS trainer. Through her perseverance and dedication there she took on the reigns of becoming their Quality Investigations/Infection Control in her first office position role but never stopped performing her nurse duties as a caregiver and friend to all the nurses. She was also very crafty - turning their house into a neat, colorful home with her various crafts - another past-time that brought her great joy. She made neat items as gifts to her friends and family such as quilts, blankets, slankets, purses, scarves, jewelry, rollup cushion beds, DIY room projects, interior decorating / painting, she did it all. Kara was adventurous and loved travelling. It started with her travel nursing, then embarked on a few caribbean cruises with Ron and family, probably her favorite destination trips with fun excursions and theme parks Disney world, Disneyland, Harry Potter World. She also loved the summer family reunion trip put together by her mom annually in Florida, but wassuper content just to travel and spend time with all family. Kara also enjoyed skiing and snowboarding with Ron leading them to settle in Denver, CO. She loved decorating the house for Halloween, Christmas and Easter every year and was crazy for Christmas like her mom. Her favorite movies were the original Star Wars and Empire Strikes back films, the Harry Potter series, National Treasure, Independence Day, The Day after Tomorrow, Twister, original/80s classics and had them on frequently in the background. She also loved fantasy/sci-fi, crime shows, animal planet, and shows like hoarders where people needed help or to be saved. Enjoyed attending music concerts with Ron, especially classic alternative and went to several together, favorites Depeche Mode, The Cure, Erasure, New Order and recently Blaqk Audio. At home she always loved to create the family shopping list to cook great family recipes with Ron and bake with Kailey. She played board games and co-op RPG video games with Ron, their faves together were Baldur’s Gate and Champions of Norrath series. Kara is survived by her husband of 18 years, Ron, their children, Kailey (12), Brennan (9) and beloved dog Raisa “Mammer Jammers”. She is also survived by her mother, Jeanne Ebaugh of Cape Girardeau, a younger sister, Megan Ebaugh-Faris (Stu) of St. Louis, MO, a niece, Delia, and nephew, Grady, along with so many aunts, uncles, cousins and friends who loved her immensely. She was preceded in death by her father, Paul L. Ebaugh, III.

The family of Kara Michelle Askar created this Life Tributes page to make it easy to share your memories.

Send flowers to the Askar family.