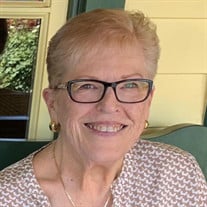 Joy Marlynn Bowman, age 81, passed away peacefully on February 28th, 2021 at approximately 11:30 PM at Swedish Memorial Hospital in Englewood, Colorado. She was born on March 12th, 1939 to Elvaro “Shorty” Meyers and Blanche Meyers in Glade, Kansas. In 1941 the Meyers family moved to Burlington, CO where Joy spent her childhood enjoying a country lifestyle with her five siblings. As the oldest female in the family she quickly developed a strong personality and maturity through caring for her younger siblings; not to say that she didn’t give her parents and siblings a run for their money while she was at it. Joy graduated from Burlington Highschool in 1957 and eventually moved to Denver, CO where she worked as a switchboard operator at Mountain Bell. Not long after, she was reunited with childhood friend, Calvin Bowman, who moved to Denver to begin working for Martin Marietta, which eventually became Lockheed Martin. They began dating and were married March 11th, 1961 at Burlington Methodist Church. Calvin’s employment brought them to many cities and states where Joy made countless lifelong friends. She always had a way of brining people together. After becoming a mother to son Gregory Bowman and daughter Lesa Skinner, Joy took an interest in a new career path and decided to attend cosmetology school in Littleton, CO. She was a beloved hairstylist at Manning’s, Plush Curl, and Reggie’s and unsurprisingly formed meaningful relationships with her clientele. Forty years of working on her feet was quite enough and she retired promptly at age 65. Loved ones describe Joy as happy, humorous, strong, and full of spirit. In her time on Earth, she enjoyed hosting anything from Monday Tea Parties with her closest neighborhood friends to planning annual picnics in the park for Lockheed Martin and family gatherings. Joy’s home always had an open door with promise of a delicious home cooked meal. This hospitality translated well into spoiling her grandkids. She transformed one of the rooms in her home into a nursery to welcome them at any time and even kept a pet bunny, Thumper, just for their enjoyment. A beautiful example of her immense love was when she wrote a personalized card with “BOWMAN” in all caps welcoming granddaughter Victoria Bowman into the family when son, Greg, formally adopted her. Joy always had a way of making her grandkids feel special and cared for. She expressed her creativity through coloring and sewing. She honed her skill enough to make custom clothing for her children and a bridal gown for her close friend’s daughter. In her later years she preferred to spend her time kicked back in a recliner “resting her eyes” and watching movies and television. She was known for saying “I spent all those years working on my feet so that I could relax in my retirement.” Joy was preceded in death by father, Elvaro Meyers; mother, Blanche Meyers; father in law, Orvil Bowman; mother in law, Phyllis Bowman; brother, Robert Meyers; sisters, Ivalee Bennett, Norma Harrison (Milton), and Virginia “Kay” Carson (Robert); brothers in law, Charles “Bill” Bowman (Joyce) and Donald Haave; nephew, Grant Harrison; and niece, Kelly Harrison. She is survived by husband, Calvin Bowman; brother, Ronald Meyers (Sandra); sister, Debra Meyers; brother in law, Dick Bowman (Victoria); sister in law, Doris Haave; son, Gregory Bowman (Lenette); daughter, Lesa Skinner; granddaughters, Amanda Galici (Brandon) and Victoria French (Joshua); grandson, Clayton Skinner; and many cherished nieces and nephews and their children. Joy’s family will be planning a celebration of life for the summer of 2021 when the weather is enjoyable for a picnic in the park and COVID concerns are alleviated. In lieu of flowers, the family requests donations in Joy's memory be made to The American Heart Association at www.heart.org or 1777 South Harrison Street, Denver, CO 80210.

The family of Joy Bowman created this Life Tributes page to make it easy to share your memories.

Send flowers to the Bowman family.