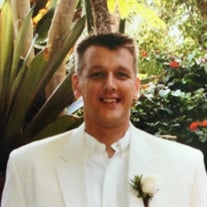 Jonathan “Jon” William Reinig, 35, passed away on March 2, 2016 at his Denver, Colorado home. Jon was born February 6, 1981 in St. Louis, Missouri to William and Linda (nee Kaminski) Reinig. He attended Centreville, High School (Clifton, Virginia) and Heritage High School (Littleton, Colorado); he continued his education at the University of North Carolina (Greensboro, North Carolina) graduating in 2004 with a degree in economics. In 2011 he completed the California Wind Turbine Tech Program. Jon enjoyed playing the guitar, rock climbing and participated in many sports throughout his life. His main interest in life was spending time with his son, Westley, and his weimaraner, Roscoe. At 6’9” he had an immense presence and a dynamic smile. Jon was a charismatic, loving man and was beloved by many. He was generous with his time, attention and love. He is survived by his son, Westley; his parents, Bill and Linda Reinig; his brother and sister-in-law, Craig and Andrea and his niece and nephews (Alexa, Brady and Caleb). He made a difference in the lives of many. We invite you to join us and celebrate his life together. The funeral service will be held on Thursday, March 17 at 10am at Cherry Hills Community Church Chapel, 3900 Grace Blvd., Highlands Ranch, CO 80126. In lieu of flowers, memorial donations are requested for Westley Reinig’s scholarship fund at CollegeInvest Savings Plan. Checks can be made payable to CollegeInvest and mailed to Linda Reinig, 2852 Wyecliff Way, Highlands Ranch, CO 80126. Checks will be deposited into his account.

The family of Jonathan William Reinig created this Life Tributes page to make it easy to share your memories.

Send flowers to the Reinig family.