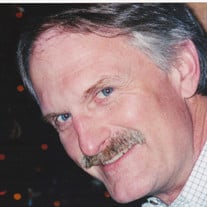 Jonathan Parham Johnson passed away peacefully in his sleep on August 17th, 2020 in Centennial, CO with his faithful bride of almost 52 years by his side. Born in Detroit, Michigan in 1945, he would have been 75 next month. An intelligent man of deep faith and an incredibly quick wit, Jon was a joyful blessing to those around him. Jon grew up in the Chicago area, the first child of Claud and Helen (“Dot”) Olson Johnson. His younger sisters, Claudia (“Corky”) and Candice (“Candy”), enjoyed his countless antics, admired his humble confidence, and were deeply shaped by his conviction and faith. While finishing his degree in architecture at the University of Illinois, Jon found his true love, Elizabeth (“Lisa”) Anderson through Intervarsity Christian Fellowship. After marriage in 1968 in Pentwater, MI, Jon faithfully served his country as a naval officer in Vietnam. While wrapping up his military service in Virginia in 1972, Jon and Lisa became proud parents, welcoming Jennifer into the world. His son Gregory was born in 1975 after the family moved to New Hampshire where Jon began to realize his childhood dream of being an architect. To better enjoy the support of beloved relatives, Jon helped move his young family back to the Chicago area in 1977. After enjoying a few more years as an architect with a small, but struggling firm near Chicago, Jon wisely saw the writing on the wall driven by the economic realities of the time. Throughout the 1980’s he gracefully transitioned his career from architecture to real estate appraisal to accounting to financial management. While working full time he went back to school, becoming a Certified Public Accountant and earning an MBA from Northwestern University. His dedication and incredible work ethic brought a successful career, culminating in a move to the Denver area in the 1990s to serve as a financial manager - a job he loved in a place he loved even more. Throughout it all he somehow managed to juggle numerous hobbies that enlivened him, including photography, stamp collecting, tennis, woodworking, and world travel. Just as Jon was retiring in 2004 he was diagnosed with Parkinson’s Disease, related to his service in the Vietnam War. For a man who had worked so hard to finally enjoy his golden years, this was a devastating blow, but you wouldn’t have known it. Like all the other challenges Jon met in life, he calmly put his nose to the grindstone, leaned on his faith in Christ, and didn’t let it slow him down. Throughout the next 16 years of living with Parkinson’s Disease, Jon carried himself with gentle grace, intelligence, kindness, and patience while never losing his impeccable wit. Dr. Awesome, as he was known to many nieces and nephews, was always quick with a joke and a smile even through his final difficult days on earth. He joked that his tombstone should note: “at least he was good with spreadsheets”. While the Library of Congress could have indeed learned some tricks from Jon, he was of course good at so much more. Jon was an amazing and beloved husband, father, grandfather, son, brother, brother-in-law, uncle, friend, officer, manager, and above all, faithful servant. Jon will be dearly missed in this world by all who knew him, but have no doubt, the angels are already laughing. Jon is survived by his beloved bride, Lisa Johnson; daughter and son-in-law, Jennifer and Bryan Pollock and their children, Carissa, Soren, and Gideon; his son Greg and his children Miles, Eli, and Amelia; his sister and brother-in-law Corky and Andrew Johnson; his sister and brother-in-law Candy and Scott Houser; and countless nieces, nephews, cousins, and other extended family that he deeply loved. Please join us in celebrating Jon’s life by attending his live-streamed memorial service Friday, August 21, 2020 at 4:00 p.m. Here is the link to the service: https://youtu.be/qqfpnTzNbEw. In lieu of flowers, Jon requested that any potential donations in his honor go to Southwest Counseling Associates, Lifewater, or Voice of the Martyrs.

Jonathan Parham Johnson passed away peacefully in his sleep on August 17th, 2020 in Centennial, CO with his faithful bride of almost 52 years by his side. Born in Detroit, Michigan in 1945, he would have been 75 next month. An intelligent man... View Obituary & Service Information

The family of Jonathan P. Johnson created this Life Tributes page to make it easy to share your memories.

Jonathan Parham Johnson passed away peacefully in his sleep on...

Send flowers to the Johnson family.