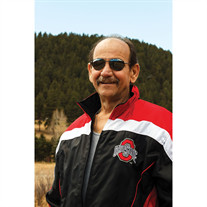 John Mathew Prete, 59, passed away at The Denver Hospice on August 11th, 2014 from liver failure.Born on January 1st, 1955 in Sarnia, Ontario Canada to Edward and Rita Prete and then the family relocated to Vermilion, OH. He graduated from Vermilion High School in 1973 and attended Lorain County Community College for technical classes. On June 16th, 1984 he married Donna (Rockie) Ondrey-Prete in Aurora, Colorado where they resided for 3 years until relocating to Sheffield Lake, OH for 15 years and then returned to Colorado in 2008. John worked in Construction Management until February of 2014. John was a loving son, brother, husband, father, grandfather and friend. He was a sports fanatic with his favorite team being the Denver Broncos. He enjoyed many years of playing softball that helped him in coaching his daughters teams for several years. He enjoyed fishing and boating in his free time and took pride in his home improvement projects.Survivors include: loving wife of 30 years Donna (Rockie) Ondrey-Prete, son Jason Mathew Prete of Amherst, OH, daughters Nikole Breanna Prete of Columbus, OH and Kaylee Marie Prete of Denver, CO, mother Rita (nee: Gerber) Prete of Vermilion, OH, brothers: Paul (Debbie) Prete of Sandusky, OH, Peter Prete of Lakewood, OH Gerard (Yvonne) Prete of Trabuco Canyon, CA, Michael (Debbie) Prete of Denver, CO, Robert (Marianne) Prete of Vermilion, OH, sisters: Anne (Doug) Cary of Lorain, OH, Theresa (Kirk) Remsberg of Lakeville, MI, as well as 2 grandchildren.He was preceded in death by his father Edward Prete in 1998.Memorial services will be held on Friday August 15th, 2014 at Pax Christi Catholic Church 5761 McArthur Ranch Rd. Littleton, CO 80124 with visitation at 12:30pm, Mass at 1:30 with reception to follow. Additional memorial services will be held on Thursday August 21st, 2014 at Saint Mary’s Church 731 Exchange St. Vermilion, OH 44089 with visitation at 12:00 pm, Mass at 1pm with reception to follow at the Wilson Household at 646 Dogwood Drive Vermilion, OH 44089.In lieu of flowers donations can be made to the American Liver Foundation.Special thank you to The Denver Hospice for all their kindness and efforts as well as all of our wonderful neighbors and friends for all your support.

John Mathew Prete, 59, passed away at The Denver Hospice on August 11th, 2014 from liver failure.Born on January 1st, 1955 in Sarnia, Ontario Canada to Edward and Rita Prete and then the family relocated to Vermilion, OH. He graduated from Vermilion... View Obituary & Service Information

The family of John M. Prete created this Life Tributes page to make it easy to share your memories.

John Mathew Prete, 59, passed away at The Denver Hospice on August...

Send flowers to the Prete family.