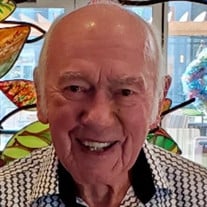 Pastor John Lewis Moore went to be with his Maker on Saturday Evening, September 4th, 2021, peacefully in his home at Morningstar at Ridgegate in Lone Tree, Colorado. He was born in Ava, Ohio, May 1st, 1925, and was the son of Robert and Nellie (Dudley) Moore. John was one of eight siblings including Ray, Robert, Donny, Charles, Hazel, Hope, and Faith. Having lived to the age 96 introduces a life story of a man of many memorable experiences and noteworthy accomplishments. At a young age Johns family moved from Ohio to Colorado which afforded him the opportunity to attend Peoples Bible College until he was drafted and served his Country during WWII in the Army as a Army Medic. After this time, John worked at a potato chip factory where he fell in love with his co-worker Joyce. John would hurry to finish his delivery route to come back just to see Joyce before her shift ended. This led to John and Joyces marriage of 25 years and 4 wonderful children, Paul (Pam), Judy, (Ken) Gayla (Bari), and Stephen (Desiree). John was a loving and devoted husband, father, and grandfather to 18 Grandchildren, and 5 great grandchildren, with another on the way. John attended Peoples Bible College, Nazarene Theological Seminary, Garrett Evangelical Theological Seminary, and Western Theological Seminary and eventually received his Master’s in Divinity. John’s choice to attend these seminaries would lead him down a lifelong journey of serving God and others. As a local Pastor serving in Colorado, New Mexico, Michigan, and Illinois, his life and ministry was influential in touching and changing many lives. John ministered in 2 different denominations Free Methodist and United Methodist in churches. Memories that are characteristic of his calling include Founder/Principal of Christian Day School, ministering on Navajo Reservations, Director of Public Relations at Woodstock Children’s Home, on a broadcast of “Ask the Pastor” at WTU TV, Olive Branch Mission, and President Emeritus of the Michigan Interfaith Council on the Alcohol Problems. John had a heart for the world and was blessed beyond measure as he traveled to 11 countries including 17 trips to Israel as a part of Blossoming Rose Organization and archaeological digs. In Haiti he acquired a love for the children there through his work in orphanages and schools. As a part of the rescue for Chernobyl disaster John spent time transporting survivors to hospitals for treatment. In 1982 John and Ellie married and John was blessed with additional children Jay, Patti, and Margie. God opened a door for John to serve in the Southwestern Michigan Conference of the United Methodist Church. He is remembered most for the time, love, and care for the people in his life. Yet he still took time for his family who meant the world to him including yearly family vacations visiting 45 out of the 50 states. He had a passion for life and enjoyed running, golfing, softball, working out in the gym, and cars. Even with the loss of his limb and relearning to walk and making adjustments to tailor his lifestyle to accommodate this loss, he stood strong in the face of his struggle with determination, strength, and courage. In 2017 John returned to Colorado to live at Morningstar at Ridgegate Senior Living. He was well known and loved from the beginning. The adjustment to his new residence was made easier when he started a Protestant Service. His time at Morningstar was characteristic of the man he was. The patriarch of our family, he lived out his final days with his children and grandchildren close by. We will miss you, John; your spiritual legacy will live on. As John would say, “Let Us Pray”. There will be a Public Viewing on Wednesday, September 29th, from 4PM-6PM at Heflebower Funeral & Cremation Services, 8955 S. Ridgeline Blvd., Suite 100, Highlands Ranch, CO 80129 www.heflebowerfuneralservices.com. The Memorial Service will be held on Thursday, September 30th, 2021 at 10AM at St. Andrews United Methodist Church, 9203 S. University Blvd., Highlands Ranch, CO 80126. The service will be live-streamed by Heflebower Funeral Services. Donations can be made in John’s memory to: John L. Moore Memorial Fund-Payable to John L. Moore, Blossoming Rose www.blossomingrose.org, Pathfinder Church www.pathfinderchurch.com, and Trowbridge Community Church www.trowbridgecommunitychurch.com. Family Contact Address: 10579 S. Wildhurst Circle Highlands Ranch, CO 80126 & CP 303-475-1329 The service will be live-streamed by Heflebower Funeral Services. If you have a Facebook account, search “Heflebower Funeral Services”-it will be the most recent post and will not be visible until the time & date of the service. If you don’t have a Facebook account, visit www.heflebowerfuneralservices.com and scroll down to bottom of page and click on the middle of the Facebook icon and the live-streamed service will be the most recent post on their page and will not be visible until the time & date of the service.

Pastor John Lewis Moore went to be with his Maker on Saturday Evening, September 4th, 2021, peacefully in his home at Morningstar at Ridgegate in Lone Tree, Colorado. He was born in Ava, Ohio, May 1st, 1925, and was the son of Robert and Nellie... View Obituary & Service Information

The family of John Lewis Moore created this Life Tributes page to make it easy to share your memories.

Pastor John Lewis Moore went to be with his Maker on Saturday...

Send flowers to the Moore family.