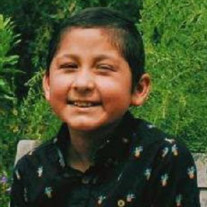 Joel Alexander Zamora was born June 10, 2008 in Escondido, CA to Isaac and Becky Zamora. Joel was the younger brother and best friend of James Zamora. Joel loved God, his family and anything Disney. In 2007 at 9 years old, God allowed Osteosarcoma Cancer to come into his body, so that way Joel could be a testimony to those who came in contact with him or our family. God surrounded Joel with so much peace, love, comfort, and grace that it didn’t matter what he was going through, he smiled right through it. That smile penetrated into hearts all around the world. His smile could bring hope and strength to whatever trial you were facing. Lives were forever changed when you met Joel. As the Cancer took its toll on Joel's body, it could never take Joel's worship. Joel worshiped until his final days. What the devil thought was going to destroy a small boy actually strengthened and fortified his Faith and his Worship. God kept Joel, against all odds, rather healthy so he could be a voice in the valley. Joel was a member of Landmark Tabernacle where he loved to go anytime, he could go. Joel's last service he made it a point to tell us that he wanted to go to the altar and get prayed for. We did not think anything of it as this was normal for us to go pray. What happened that night was something so mind blowing. The presence of God fell so strong in that place and radiated off Joel and I believe lives were changed. Joel loved going to church. Joel was also a part of the Colorado Christian University Men's Soccer Team. He loved soccer. Every time we were able to go to a game his face would be lit up. We were able to connect with players and coaches. Two players specifically, Bret Folks and Zach Roberts, made such a huge impact on him. They became family to us. Joel is survived by parents Isaac and Becky Zamora, brother James Zamora. Grand parents Juan and Alma Zamora, Michael and Esther Glover. Uncles and Aunts, Melissa &Ryan Steiner, Philip Glover, Josh & Narissa Zamora, and Krystina & Joe Garcia. Cousins Noah, Preston, Jonah, Madeleine, Cohen, and Ella. Along with many other extended family including Great Grandmothers, Great Aunts & Uncles, and cousins. We would like to thank the team at Children's Hospital Colorado who took amazing care of Joel. You not only were our doctors and nurses, but also family. Thank you to Colorado Christian University Men's Soccer Team. Thank you to Landmark Tabernacle Of Denver, The Point Church of Escondido, and families who have shown us so much love and support through these past few years. We love every single one of you. Pall Bearers: James Zamora, Noah Zamora, Josh Zamora, Philip Glover, Marquis Johnson, and Benjamin Reyes. “Hero of Faith” Psalm 103:3 Who forgiveth all thine iniquities; who healeth all thy diseases. Joel's funeral service will be live-streamed on the Heflebower Funeral Services Facebook Page. To view, visit the Heflebower website's home page at www.heflebowerfuneralservices.com, then scroll all the way to the bottom of the page. Click on the Facebook icon, and you will be taken to Heflebower's Facebook Page. Scroll down a bit, and you will be able to see the live-streamed video, when it begins (not beforehand).

The family of Joel Alexander Zamora created this Life Tributes page to make it easy to share your memories.

Send flowers to the Zamora family.