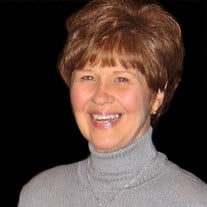 Jean Ann Siecke passed away February 17, 2016, at Porter Hospice in Centennial, CO, after a courageous battle with metastatic melanoma.  She died peacefully, surrounded by family.  Jean Ann was born March 19, 1943 in Big Spring, Texas, the daughter of Bruce and Beryl Huscher Hart.  The family moved to Elbert County, Colorado when Jean Ann was two years old.  She spent the rest of her childhood in Kiowa and Denver.  After studies at CSU and Colorado State College, Jean Ann moved to Colorado Springs where she managed a beauty salon.  She returned to Kiowa to care for her mother who was battling pancreatic cancer, helping care for her sister Shelley, who was still in high school, Lucy, who was in college and her stepfather, Jack Pemberton. Following her mother's death, Jean Ann relocated to pursue a career in Denver and married Donald Siecke in 1978.  Family was important to Jean Ann. Her growing up and adult years were full of extended family gatherings. She also loved to fish when she was physically able and took several fishing trips to Canada with Don, as well as fishing the South Platte at the Swan Hereford Ranch in Buffalo Creek, CO. Throughout her life Jean Ann lived to serve others.  She loved Jesus and was very involved in the church, serving faithfully as a Deacon and Elder.  In addition, she played piano during church worship services in Elbert County for many years.  Jean Ann also had a heart for children, mentoring in the inner-city for 14 years through Whiz Kids Tutoring.  Jean Ann is survived by her husband, Don; her half-sisters, Lucy Behan (Brad), Shelley Buterbaugh (Tim) and Cindy Haugen (Mel); half-brother, Steve Hart (Alice), step- daughters, Susan Kings (Kevin) and Nancy Warner (Rick), along with eight grandchildren, nieces, nephews and numerous other relatives and friends.  A memorial service will be held at Cherry Creek Presbyterian Church (10150 E Belleview Ave.) at 11:00 AM on Monday, February 22, 2016, followed by a reception/luncheon at the church. In lieu of flowers, donations may be made in Jean Ann's name to Whiz Kids Tutoring, Colorado Christian University or Elizabeth (Colorado) Presbyterian Church.

The family of Jean Ann Siecke created this Life Tributes page to make it easy to share your memories.

Send flowers to the Siecke family.