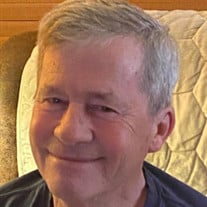 Jay Martin, 70, of Highlands Ranch, Colorado, passed away on Friday, April 30, 2021 at his home. Much-loved husband, father, grandfather, brother, uncle, cousin, and friend, Jay will be dearly missed by all who knew and loved him. Born on July 10, 1950 in Chicago IL to Lewis Edward and Jean (Lawrence) Martin, Jay is the fourth of eight children. After his 1968 graduation from Barrington High School, Barrington IL, and further studies at Harper College, Palatine IL, Jay turned his sights westward and, in 1974, hitchhiked cross-country to seek adventure and love. His travels took him first to Twin Falls, Idaho where he labored as an ironworker on the I.B. Perrine Bridge which spans the Snake River and its awesome canyon. Traveling further west, Jay then lived for a time in Manhattan Beach, California. By 1979, he had moved to Denver, Colorado, where he worked as district manager for Templeton Kenly Co., an industrial supply company. In Denver, Jay met the love of his life, Susan Kanda. The two were united in marriage on May 19, 1979 and then moved to Mesa, Arizona where they bought a home and started their family. The birth of three boys blessed Jay and Suzy’s marriage: sons Jayson, Andrew, and Sean. The years in sunny Arizona offered Jay frequent opportunities to play a round of golf with friends, a favorite past-time of his. Maybe his greatest satisfaction, though, was when he went with his sons, as often as possible, to spring training camp games to root for his beloved Chicago Cubs every year at Mesa’s Hohokam Stadium. Jay’s unwavering devotion to the Cubbies was rewarded in 2016 when the Cubs finally clinched the World Series, a cause of unbounded jubilation for the lifelong fan. In 1994, Jay and Suzy returned to Colorado with their sons. He worked for Industry Railway Suppliers as a warehouse manager. He worked as a security guard for Allied Barton the past few years and retired in July, 2020. Over the years in Arizona and Colorado, Jay pursued many interests. He was a fan of professional baseball and hockey, but he also coached tee ball and youth rollerblading hockey for his boys’ teams. He loved to camp out in nature. At home, he was a gardener, bird watcher, auto mechanic, and quite a good handy man. Most recently, Jay took happy delight in the company of each his six grandchildren: Vianca, Jacob, Jaxson, Maxwell, Aksel, and Luca. A prouder grandfather there could never be. Maggie, ever faithful doggie friend, was constantly by his side and deeply loved; best walking buddy, ever. Jay is survived by his loving wife, Suzy, of Highlands Ranch, CO; his children: Jayson (Amanda) Martin of Puyallup, WA; Andrew (Vanessa) Martin of Castle Rock, CO; Sean Martin of Canon City, CO; three brothers: Roger Martin of Blanchardville, WI; Jeff (Janice) Martin of Michigan City, IN; Peter Martin of Grand Rapids, MI; four sisters: Lee (Lyle) Fleury of Port St. Lucie, FL; Mary (Robert) Kriske, Hobe Sound, FL; Dawn (John) Feit of Barrington, IL; Theresa Martin of Palatine, IL. He was preceded in death by his parents, Lewis and Jean Martin. Jay’s cousins, nephews, nieces, sister- and brother-in-laws, and his many friends will always remember his fun-loving, playful spirit. Every one of us will miss Jay greatly. A private service is planned for the family on Thursday, May 6, at Seven Stones Cemetery, Littleton CO. A Catholic Mass and Celebration of Life is planned in the near future when his friends and family can gather together to share happy memories and stories and reminisce the many good times spent with Jay. In lieu of flowers, please pay it forward with a kind word, a loving deed, or a bright smile.

Jay Martin, 70, of Highlands Ranch, Colorado, passed away on Friday, April 30, 2021 at his home. Much-loved husband, father, grandfather, brother, uncle, cousin, and friend, Jay will be dearly missed by all who knew and loved him. Born on... View Obituary & Service Information

The family of Jay Martin created this Life Tributes page to make it easy to share your memories.

Jay Martin, 70, of Highlands Ranch, Colorado, passed away on...

Send flowers to the Martin family.