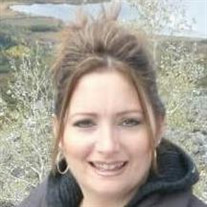 Jane Frances Duran, 51, of Denver, passed away on Wednesday, June 14, 2017 in her home after a long battle with cancer. Jane was born on December 28, 1965 in Denver, Colorado at General Rose Medical Center; mother Elizabeth Sue (Kirkpatrick) Bradley; She lived in La Junta, Colorado with her mother and father Theodore Bradley for 2 ½ years. Her parents divorced and Jane moved to Boulder, Colorado with her mother, who worked as an operator for Mountain Bell. Jane spent the school year with her mom and summers with her father. When she was nine years old, Jane and her mother moved to Denver, Colorado. Jane attended All Saints Catholic School through seventh grade and then went to Kunsmiller Junior High School in Denver. Jane finished her education at Abraham Lincoln High School. During her sophomore year in high school, she met Paul Duran at a mutual friend’s house. According to Jane, Paul never called or talked to her after that, even though she showed interest. So, Jane decided to take charge. One day in high school, Jane gave him a hand-drawn rose with a note that said to call her. Paul obliged and they talked on the phone for hours over the next several weeks. Then they started “hanging out” together. On October 9, 1983, Jane gave birth to their first daughter, Crystal. On May 11, 1985, Paul and Jane got married in Las Vegas, Nevada. On June 26, 1985, they had their second child, Chanelle. Paul and Jane lived in various places over the next several years including Lakewood and Denver. They settled into their current house on Utica in 1991. On April 26, 1997, Paul and Jane had their third child, Chaylea in their home on Utica. Jane had a passion and love for art. She studied Interior Design at CEC and wanted to go to art school. She sold some of her artwork at art fairs. Jane held several positions during her career. She worked at Winchell’s Donuts and sold jewelry for Radha Rasa at the Tabor Center in downtown Denver. Jane was employed by Grocery Warehouse and Albertsons as a cashier. She worked at Cubs Food as a Head Cashier. In her last position, Jane worked for Lowe’s Home Improvement as a bookkeeper. She is survived by her husband Paul Duran; children Crystal Karnes, Broken Arrow, OK & Chanelle Duran, Denver, CO & Chaylea Duran, Denver, CO; father Theodore Bradley, La Junta, CO; sister Beth Bradley, Aurora, CO; step-sisters Eldarae Braddon, Kailua, HI & Twyla Pickering, Pueblo, CO. She was preceded in death by her mother Elizabeth Sue (Kirkpatrick) Bradley; step-mom Lorraine (Bundy) Bradley; step-brother Russell Reed Bundy; step-sister Darla Jean (Bundy) Ronning. A memorial service followed by a celebration of life will be held on Tuesday, June 27, 2017, at 12:00 PM at Veterans of Foreign Wars Hall, 4747 West Colfax Avenue, Denver, CO 80204. To help support the Duran family go to: https://www.gofundme.com/helpdurans

Jane Frances Duran, 51, of Denver, passed away on Wednesday, June 14, 2017 in her home after a long battle with cancer. Jane was born on December 28, 1965 in Denver, Colorado at General Rose Medical Center; mother Elizabeth Sue (Kirkpatrick)... View Obituary & Service Information

The family of Jane F. Duran created this Life Tributes page to make it easy to share your memories.

Jane Frances Duran, 51, of Denver, passed away on Wednesday,...

Send flowers to the Duran family.