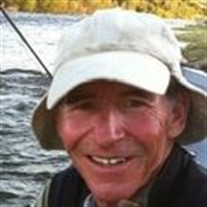 James “Jay” William Smith, 63, died February 8, 2020 surrounded by family and close friends. Jay was born July 21, 1956 in Albuquerque, New Mexico, to Gene and Leona “Lee” Smith. After several moves, Jay and his family ended up in Colorado in 1963. He quickly developed a love for the mountains and outdoors. Jay started skiing at a young age and became an excellent skier. He enjoyed skiing backcountry before it became popular, preferring Loveland or Vail Pass over any resort. In the beginning Jay and friends hitch-hiked up the pass then skied down. Eventually he inherited a snowcat to shuttle skiers, and became known as “Snowcat Jay”. If you got to ski a powder day with Jay you were lucky. Jay’s other passion in life was fly fishing. He fished many rivers in Colorado and Wyoming. Jay loved to get out of the city to go to his favorite spot, “The Reef” on the North Platte in Wyoming. He enjoyed great fishing trips with his dog Cash, friends and family. Through all these endeavors Jay made lifelong friends. In recent years Jay continued to make numerous friends though his time spent at the shooting range, Jason Street Dog Park and Centennial Lake. His constant companion was Cash. Jay will be remembered as a loving father, brother, uncle, a good neighbor and a dog’s best friend. Jay was always willing to help anyone out. He was well known for his handyman skills, craftsmanship and attention to detail. So much so that he made a profession out of it. It's hard to find a friend or a family member without some of his handiwork in their home. His legacy will live on in many of these works of art. Jay is survived in death by daughter Emily (Beau) Oyler, son Andrew Smith, their mother, his “co-parent” Margie Throm, his sister Jeanette (Greg) Voelm, brother Mike (Chris) Smith, sister Marianne (Mark) Taras as well as many nieces and nephews. He is preceded in death by his parents, and sister Peggy (Eric) Warp. A celebration of life has been moved to August 2, 2020, 11 AM at Jason Street Park: 4299 S Jason St, Englewood, CO If desired, please donate to the Lung Cancer Colorado Fund through the University of Colorado Hospital Foundation in memory of Jay.

The family of James “Jay” William Smith created this Life Tributes page to make it easy to share your memories.

Send flowers to the Smith family.