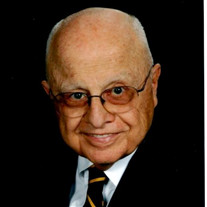 James Leo Gossman, age 91, died of heart failure on Tuesday September 21, 2021, at Brookdale Meridian Senior Living Center in Englewood, Colorado. Jim was born on March 20, 1930 in Mitchell, South Dakota to Leo Martin and Anna Laura (Schueller) Gossman. He attended Catholic schools in Sioux Falls, South Dakota. In 1948 he graduated from Cathedral High School where he was captain of the football team. After high school, he served in the U.S. Army in Germany and played one year on a regimental level football team. Jim then attended South Dakota School of Mines and Technology graduating in 1955 with a degree in Chemical Engineering. After college, Jim met and married Marie Gudinas. They were married in October of 1957 and spent the next 63 years together. Jim’s entire career was spent with Eastman Kodak of Rochester, New York, first as an engineer and later as a purchasing manager. He was on the development team of the Eastman Kodak plant in Windsor, Colorado. That job brought he and his family to Greeley, Colorado in 1969. He retired from Kodak in 2004. Jim served on various committees in Greeley and Weld County. He volunteered at Habitat for Humanity; North Colorado Medical Center; Catholic Charities, and Hospice of Northern Colorado. He was also a lifelong blood donor donating over 25 gallons total. Music was an important part of Jim’s life. He enjoyed listening to many styles of music and played both clarinet and piano. In retirement he played in numerous concert bands in northern Colorado and in student ensembles at the University of Northern Colorado. In 1988 he joined a band which included musicians from all over the U.S. They performed in Norway, Denmark, Sweden, Finland and The Soviet Union. Jim and Marie also spent much of their time traveling throughout Canada and the United States. They visited every state except Oklahoma and Hawaii. He also enjoyed both his vegetable and flower gardens. Jim was proceeded in death by his parents; daughters Anne (Darryl) Deppe of Seattle, WA; and Karla (Donald Wright) Gossman of Bennington, NE. He is survived by his wife Marie and by daughters: Martha (Mike) Stroman of Highlands Ranch, CO; and Ruth (Jamie Mannon) Gossman of Pangburn, AR; sister Mary (Larry) Keck of Urbandale, IA; brother Gerald (Gail) Gossman of Omaha, NE; grandchildren: Timothy (Sara) Stroman of Hastings, NE; Audrey Deppe of Seattle, WA; and Laura (Mario) Steffanina of Pittsburgh, PA and great-grandsons Callan Stroman, Giuseppe and Elio Steffanina. There will be no public services. Suggested Memorials are St. Mary Catholic School, 2151 22nd AVE, Greeley, Co 80631; Habitat for Humanity or Colorado Palliative & Hospice Care, 6551 S. Revere Parkway, #130, Centennial, CO 80111.

The family of James Leo Gossman created this Life Tributes page to make it easy to share your memories.

Send flowers to the Gossman family.