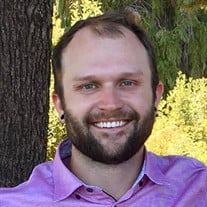 Jacob Mark Seccombe was born to Mark and Maggie Seccombe on January 10, 1989, in Littleton, Colorado. Two-and-a-half years later, he became the proud big brother of Emily Grace. Jake was a joy to those who knew him, and was known for his fun-loving, curious nature—a trait that was obvious at a young age, especially when he played team sports. Winning games was low on Jake’s priority list, as he was far more interested in chatting with teammates (and even opponents), and was often distracted by jets flying above, squirrels, and once, a used battery he found on the field. This curiosity made Jake a natural engineer, and even as a kid, he liked to build things. He deconstructed McDonald’s Happy Meal toys to make a doorbell for his bedroom, used Legos to make a hand mixer for his chocolate milk, and—along with his dear cousins—used old castors and wooden planks to build a go-cart, complete with a steering wheel and brakes. Though young Jake seemed destined for a creative career, he had different ideas about his future. He dreamed of living in a van with ten cats and working at Taco Bell. By the time he graduated from Arapahoe High School in 2007, however, Jake’s dream had shifted to mechanical engineering, and he went on to receive his bachelor’s degree from Metropolitan State University in 2013. His college internship turned into a career at ATS Rocky Mountain, where he spent approximately nine years as a valued employee. Because of his interest in science and technology developments, Jake was the guy to call when you were looking for a new phone, TV, vacuum, or even mosquito repellant. He also had a knack for turning someone else’s trash into a treasure and was constantly refurbishing discarded TVs, bicycles, and camping gear. Jake not only loved activities like snowboarding but also dabbled in car repair, rebuilding his Subaru engine; flying drones, which evolved into building drones; and 3D printing, which involved hours of research and resulted in numerous vases, nut-and-bolt sets, cat figurines, moon replicas, and planters. His latest venture was melting copper wire into solid copper ingots. Jake’s wide set of interests was matched by a deep love for his family. The Seccombe family bonded over many camping trips and vacations, including mission trips to Burkina Faso and the Dominican Republic. At family gatherings in later years, Jake and Emily could be found having conversations composed entirely of quotes from The Office, their favorite TV show. In 2011, Jake met the love of his life and best friend, Alyssa. The two were inseparable from the get-go and got married on July 29, 2017 on Bainbridge Island, Washington. Three years later, they moved to Hillsborough, Oregon, fulfilling a dream and falling in love with the Northwest while camping, clamming, and exploring the mountains and coast. They also managed to attend several music festivals when they could get away. Their dog Suba (short for Subaru) and kitties Boo and Skelli brought enormous love and entertainment into their life. Jake passed away on November 17, 2021, in Hillsborough, Oregon. Though we can never fully express what Jake meant to his loved ones, these stories offer a glimpse of the person who continues to live in the hearts of his friends and family today. Jake was a husband, son, brother, grandson, nephew, cousin and friend who brought joy to all who knew him; he is deeply loved and dearly missed. The family’s faith in Jesus Christ as their Savior, gives them assurance they will see him again in Heaven. Jake, we are grateful for the time we had with you. Jake is survived by his wife, Alyssa Seccombe; parents Mark and Maggie Seccombe; sister Emily (Daniel) Frink; mother-in-law Lisa Einsel; step-father-in-law Mark Einsel; father-in-law Devin Quattlebaum; brothers-in-law Paul Schooley and Zach (Amanda) Schooley; niece Adeline; nephew Knox; grandfathers Rod Seccombe and Jack Katchur and numerous uncles, aunts and cousins. A memorial service will be held at Grace Chapel on Saturday, December 11th at 10:30 am. The service will be live-streamed https://vimeo.com/655667796/56e0f594f6

Jacob Mark Seccombe was born to Mark and Maggie Seccombe on January 10, 1989, in Littleton, Colorado. Two-and-a-half years later, he became the proud big brother of Emily Grace. Jake was a joy to those who knew him, and was known for his fun-loving,... View Obituary & Service Information

The family of Jacob Mark Seccombe created this Life Tributes page to make it easy to share your memories.

Jacob Mark Seccombe was born to Mark and Maggie Seccombe on January...

Send flowers to the Seccombe family.