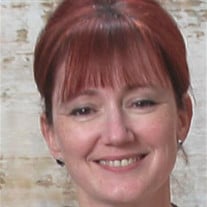 Heather R. Rose May 10th 1970 &#8211; January 11th 2019 I am writing to tell the story of the life and times of my wife Heather Rose. We begin in the town of St. Joseph Michigan where Heather was born to Howard and Pricilla Mildebrandt on May... View Obituary & Service Information

The family of Heather R. Rose created this Life Tributes page to make it easy to share your memories.

Send flowers to the Rose family.