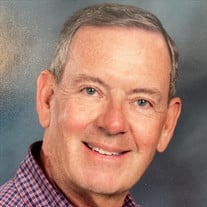 Harold Ray McFarland, 79, passed away on Saturday, June 12, 2021 in Denver, Colorado, after a recent battle with brain cancer. Harold was born October 11, 1941 to Lorain & Evelyn (Culbertson) McFarland, in West Union, Ohio. He graduated from Springboro High School in 1959, and was a 1963 graduate of the University of Dayton. Harold then began his career as an engineer with Western Electric (later AT&T), while finishing his master’s degree in 1967 at THE Ohio State University (Go Bucks!). He married his wife Betty in 1974, and after several relocations, settled/retired in Highlands Ranch, Colorado. Most people who knew Harold recognized his love for golf, for his wife Betty, and for his friends & family. All through his life, Harold remained highly active and healthy, running several half-marathons, traveling the world, exercising, and more. His greatest pleasures were enjoyed golf with his club buddies and meals with his church friends from St. Andrew United Methodist Church. He also enjoyed Sunday drives in his “toy cars” with Betty. We will miss Harold’s love for life and belief in the best of people. Harold was preceded in death by his parents and brother Richard. He is survived by his wife Betty; sister Norma Spencer; children Scott (Dianna), Todd (Tonya), Kara (Glenn), Brad; and stepson Scott (Traci). Harold’s greatest pride were the blessings of his 9 grandchildren, 8 great grandchildren, and 4 great-great grandchildren! His family will be celebrating his life with an Open House memorial at Lone Tree Golf Club (9808 Sunningdale Blvd, Lone Tree, CO) on Tuesday, June 29th from 5-7pm, with a brief service at 6pm. Please feel free to stop by and share in memories and appreciation. Harold’s interment will be performed later this summer at Glen Rest Memorial Estate, Reynoldsburg, Ohio. In lieu of flowers, we encourage donations be sent on his behalf to: Porter Hospice Foundation (https://www.rmahf.org/porter-hospice-foundation.html

The family of Harold McFarland created this Life Tributes page to make it easy to share your memories.

Send flowers to the McFarland family.