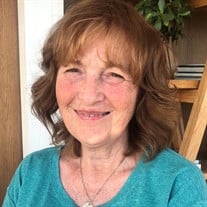 Ginger Williamson, age 79, passed away peacefully on February 10th, 2022 at Morningstar Ridgegate in Lone Tree, Colorado. She was born in East Orange, New Jersey, on September 6, 1942 to Dorothy (Eggleston) and Graham Nash, and grew up in San Marcos and Santa Barbara, CA. Ginger graduated from Santa Barbara High School in 1960 and from the University of the Pacific in Stockton, CA in 1964. After college, Ginger was a preschool and elementary school teacher and later had a successful career in real estate. Ginger had a life-long passion and talent for singing and painting. Once she and her late husband, Tom Williamson, retired in Durango, Colorado, they enjoyed many years of skiing, motorcycling, RV travels, and doting on their beloved Golden Retrievers. Ginger also sang in her church choir, played bridge with wonderful friends, and traveled around the world with her sister. Above all, family was the most important thing to Ginger, and she especially loved time with her daughters and grandchildren. Ginger is survived by her two daughters, Michelle (Michael) McGuire and Melissa (Jay) Carpenter, her step-daughters, Dayna (Marc) Provitt and Tori (Joshua) Masterson, her sister, Carolyn Lanza, and brother, Ron Nash, and twelve grandchildren - Megan Bates, Nathan McGuire, Emy McGuire, Riona McGuire, Geyelin Carpenter, Charlotte Carpenter, Henry Carpenter, Estelle Carpenter, Addison Provitt, Nat Provitt, Maya Masterson, and Parker Masterson, as well as great grandson, Alexander Bates. A memorial service will be held at the Parker United Methodist Church on Saturday, February 26th, at 12:00pm. A private burial and a celebration of Ginger’s life will follow. She was dearly loved and adored by all, and will be missed forever more. In lieu of flowers, Ginger’s family requests that donations in her memory be made to the American Cancer Society for Brain Cancer Research by calling 1-800-227-2345 or by clicking the link listed under "Donations" event below:

Ginger Williamson, age 79, passed away peacefully on February 10th, 2022 at Morningstar Ridgegate in Lone Tree, Colorado. She was born in East Orange, New Jersey, on September 6, 1942 to Dorothy (Eggleston) and Graham Nash, and grew up in San... View Obituary & Service Information

The family of Ginger Williamson created this Life Tributes page to make it easy to share your memories.

Send flowers to the Williamson family.