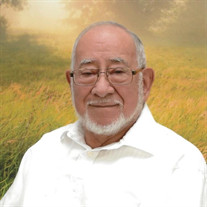 Ezequiel ‘Zeke’ Reyes, age 88, passed away peacefully on Thursday, December 16, 2021. He was born April 22, 1933 in Aguilar, CO to Benito Reyes and Irene Nuanes – in total they were a family of seven children to include four brothers and three sisters. He stayed and helped on the family farm for several years before moving to Denver. He worked at a bakery for several years in the Denver area. He then began working for the carpentry union and traveled to various states, like Texas, Florida and Wisconsin. Later he began his carpentry apprenticeship and became a professional carpenter for almost 45 years. He spent most of those years, almost 20 years, at Saunders Construction. Zeke was loved for his sense of humor and big smile. He was a giving man who loved his family. Zeke was always the biggest sports fan. He loved to watch any Colorado professional team. In his younger years, as a Bronco south stands season ticket holder, he would spend his Sundays tailgating and enjoying the game. When he wasn’t at a Broncos game, he spent time watching the Nuggets, Avs and Rockies. Zeke is survived by his wife of 38 years, Wendy; and his brother, Florencio (Ray). He has two daughters from a previous marriage, Yvonne and Paula. They gave him four grandsons, Zeke, Eric (adopted as son), Henry and Bernard and many great grandchildren and great-great grandchildren. He also has two step-daughters, Cheryl and Renee. They gave him six grandchildren, Madison, Ethan, Mason, Emma, Savannah and Grace. In lieu of flowers, please feel free to donate to two foundations that were important to Zeke: Parkinson’s Foundation (https://www.parkinson.org/) Parkinson's Foundation 200 SE 1st Street Suite 800 Miami, FL 33131 Greyhound Rescue in CO (https://www.greyhoundadoption.com/) Colorado Greyhound Adoption, Inc PO Box 2404 Littleton, CO 80161-2404

The family of Ezequiel ‘Zeke’ Reyes created this Life Tributes page to make it easy to share your memories.

Send flowers to the Reyes family.