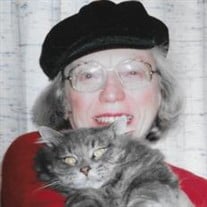 Eve Reed passed away at the age of 101 on Monday, March 29, 2021, at her daughter’s home in Centennial, Colorado. Eve’s daughter, Judy, was Eve’s sole caregiver. Eve lived with Judy for nearly five years. Eve’s parents, Emma and David Shanfield, courageously followed other members of the family and made a dangerous escape from the oppression of the Russians in the Ukraine in about 1913 by fleeing through a forest and over the ocean to the United States. They passed away years ago; we have been eternally grateful for their having taken the risk so that we’d be born in America. Eve was born in Chicago, Illinois, on August 28, 1919, and graduated from Roosevelt High School in 1937. Husband, William, known as Bill, and Eve, with 5-year-old daughter Judy, moved to Los Angeles, California, in about 1955. Eve's last, great love affair was with Freddie the Freeloader, a 20-year-old Maine Coon cat who was attached to her like glue. Fred was right next to her as she passed and wouldn’t leave her side. Fred adored Eve's constant petting and kissing. He couldn’t get enough, and neither could she! Eve had many feline love affairs over the course of her life, and her rescues were many. Her first “rescued” cat was when she was about 7 years old. She lugged a large, full-grown feline up three flights of stairs to her parents’ flat. Of course, she wasn’t allowed to keep the cat, who probably had a home elsewhere. Eve's husband of 36 years was the human love of her life, constant companion, and soul mate. Bill, Seaman First Class, was sent by the Navy to Purdue University, in West Lafayette, Indiana, where Eve joined him while he completed the Navy’s electrical course. When Bill boarded the battleship SS So Dakota following his course, the Navy learned of his photography skills; he was assigned to be the ship’s photographer — which assignment lasted throughout his service in the South Pacific during World War II. One of Bill’s photographs was on the cover of Life at the end of the War. With shock and heartbreak, Eve suddenly lost Bill to heart failure in 1974 at the age of 57. She would want to share her obituary with him as her final act of love, as they did everything together. Bill had a Navy burial at sea, bugle included (Bill was also a bugler!). Eve was presented with a folded flag and an album of photographs of the ceremony. A talented artist, Eve drew the likenesses of her family and many celebrities, a talent which really should have been advanced. She also loved and had an aptitude for writing lyrical poetry. Eve’s interests included traveling with Bill, and they visited many states. She took up photography, with Bill’s instruction, and turned out to be an excellent photographer too. Eve had a keen eye for a good picture. In fact, Eve won first and other top prizes for several of her shots at the Los Angeles County Photography Club. In 1992, Eve and Judy relocated to Centennial, Colorado, where they each bought a home. Eve enjoyed living in her condo until it was no longer safe to live alone, and she drove her red Super Sport Toyota until about age 95. Eve is survived by her daughter, Judy Reed, aged 74. In lieu of flowers, please donate to The Cat Care Society, 5787 W. 6th Ave., Lakewood, CO 80214 (303) 239-9680

The family of Eve Reed created this Life Tributes page to make it easy to share your memories.

Send flowers to the Reed family.