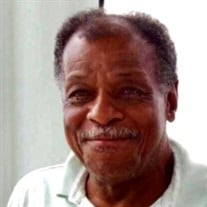 Eston Hobbs, age 79, peacefully went to join his Heavenly Father on Monday May 10, 2021, at Swedish Medical Center. He was born on April 20, 1942, in Alexandria, Louisiana, to the late Reverend Ephram and Bessie Hobbs. Eston grew up in a loving Christian home. He loved our Lord Jesus Christ and was baptized at an early age at the Annedale Baptist Church. Eston attended South Alexandria elementary School and later attended Peabody High School where he loved to play football. He was one of the best running backs for the War Horse football until he Graduated. Eston received a full scholarship to play football at Grambling State University in Louisiana. However, after his father went to be with the Lord, Eston chose to stay home and help his mom care for their family. He met his first wife and to this union two children were born. They later divorced. In 1966 he moved to San Jose California and was employed at Owens Corning Fiberglass Company. In San Jose, in 1974 he met and married his present wife, the love of his life Carolyn Hobbs. Eston and Carolyn moved to Colorado in 1983 and set down roots here. Eston was a hard, devoted worker and worked as a machine mechanic at Hershey/Jolly Ranchers, and later at the Colorado Convention Center. Probably, his favorite job was working maintenance at his second home, Grace Chapel. Eston was always busy and enjoyed making home improvements with Carolyn, fixing cars for his family, and making his yard and garden beautiful and abundant. Eston will forever be a Raiders fan and loved to and watch the Rockies, Nuggets and Avalanche play. If he was not busy working or with a project around the house, Eston loved barbecuing his famous ribs, spending time with family, or relaxing with a classic cowboy show. Eston loved dancing and singing to Motown and could always be heard singing his heart out in church. Above all, Eston loved God and his family who he would do anything for. Eston was preceded in death by his loving parents Reverend Ephram and Bessie Washington Hobbs; his brothers Orbron Hobbs, Ephram Hobbs Jr. (of Alexandria, Louisiana), Louis Hobbs of (of San Jose, California); his loving sisters Inez Richards (married to Clarence), Ruth Reed (married to Ernest) (both of Alexandria, Louisiana); and his sister Gloria Hobbs (of San Jose, California) and His In-Laws Tony and Selma Julio (of Denver, Co.) He leaves to Cherish his memory his beloved wife Carolyn Hobbs; children Charles Hobbs, Kimberly Moreno (married to Steven Moreno), Gina Kirkendall, Tony Hobbs, Angelina Hobbs-Crews (married to John Crews), Jonathan Hobbs (married to Gina Vasquez-Hobbs); grandchildren Kevin Simmons, (married to Kate Simmons) Kira Kirkendall, Brandon Kirkendall, Quincy Vasquez, Titus Crews, Melania Hobbs; great grandchildren Maya and Lincoln Simmons; siblings Catherine Jones (married to Reverend Dr. Louis Jones Jr.) Dorothy Elmore, Willie Hobbs (married to Linda Hobbs), and Viola Smith; in-laws Shirley Hobbs, all of San Jose, California. Alfred and Kathleen Vockeroth, of Raleigh, NC., Martin and Christine Kottwitz of Edwardsville,Il, Ken Julio of Frisco,Co. and a host of cherished nieces, nephews and friends. In lieu of flowers, please send any donations in kind, in Eston’s name, to his second home, Grace Chapel at gracechapel.org/give. On Thursday May 20, 2021, Eston’s family will be holding a viewing, for those who wish to attend, starting at 9:30 at Grace Chapel (8505 South Valley Highway, Englewood, CO 80112; phone: 303-799-4900) followed by a Celebration of Life Service starting at 10:30. The church will host a light Lunch Reception. Please join us in celebrating Eston’s home-going and share, laughs, memories and reminiscing of this loved man’s life.

Eston Hobbs, age 79, peacefully went to join his Heavenly Father on Monday May 10, 2021, at Swedish Medical Center. He was born on April 20, 1942, in Alexandria, Louisiana, to the late Reverend Ephram and Bessie Hobbs. Eston grew up in a loving... View Obituary & Service Information

The family of Eston Hobbs created this Life Tributes page to make it easy to share your memories.

Send flowers to the Hobbs family.