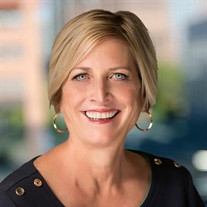 Donn Lyndall Aggeler, 55, passed away peacefully and unexpectedly in her sleep May 30, 2020. Born in Fort Collins, CO, and raised in Arvada, she graduated from Arvada West High School, where she was a cheerleader, prom queen, member of the National Honor Society, and performed with various choral groups. Upon graduation, she attended Colorado State University and there met the love of her life, Brian Aggeler. They married in 1985 and moved to the Denver area, then to Oklahoma, and back to Colorado. Deciding to return to school, Donn enrolled at Metropolitan State University at Denver, earning a degree in accounting, and was a member of the Accounting Honor Society. She accomplished this while raising two small children and working full time. A licensed Certified Public Account, she joined the firm of Causey Demgen & Moore in 1995 and became a principal in 2006, later serving as CFO. Her expertise was in auditing and certified fraud examination. Donn was elected to the Metropolitan State University of Denver Foundation Board, serving as Treasurer of that organization. She and Brian also volunteered in their neighborhood with the Jefferson Park United Neighbors. An avid sports fan, Donn loved the Colorado sports teams and closely followed the Broncos and Avalanche. Their home was always open to gatherings and special events, and her generous heart, graciousness, and beautiful spirit and smile were evident in everything she pursued. She gave freely of her time and talents and loved to laugh and sing. To quote one of her many friends, Donn was cheerful, kind, intelligent, and always willing to give out hugs. She will be lovingly remembered by her husband Brian Aggeler, mother Jolene Kercher (Jim), father Howard Knapp (Jeanette), daughters Erin Lesser (David) and Megan Jurgens (CJ); sister Wendy Morris (Dave), granddaughters Coralyn Jurgens and Mina Lesser, and beloved niece, nephews and friends. A Celebration of Life will be planned for a later time. To honor Donn, donations may be made to the Donn Aggeler Accounting Scholarship at Metro State: https://engage.msudenver.edu/giving/acc67.

Donn Lyndall Aggeler, 55, passed away peacefully and unexpectedly in her sleep May 30, 2020. Born in Fort Collins, CO, and raised in Arvada, she graduated from Arvada West High School, where she was a cheerleader, prom queen, member of the National... View Obituary & Service Information

The family of Donn Aggeler created this Life Tributes page to make it easy to share your memories.

Send flowers to the Aggeler family.