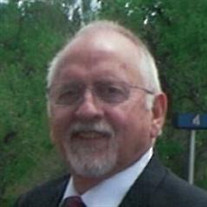 DON S SPLAWN March 28, 1941-July 7, 2016 Don S. Splawn, of Centennial CO, died Thursday, July 7, at Littleton Adventist Hospital, from complications following a traffic accident on July 1. Born March 28, 1941 in Wichita Falls, TX, to Sam Jasper and Lily Jewell (House) Splawn. After graduating from Wichita Falls Sr. High, Don spent several years studying Architecture at University of Texas. He furthered his education with advanced training in his eventual chosen field, the Petro-Chemical Industry. Don traveled the world as an engineer and with two friends started their own firm, ZAP Engineering. After leaving ZAP, Don continued to work until 2014, primarily as consultant for various firms. Don has two sons from his first marriage, Allen and Aaron. In 1992 Don met and married his Olympian sweetheart, Ice Dancer (1984 Sarajevo Olympics) Carol Jean Fox of Denver. Their children are Breanna and Travis. Don was a sky diver, bungee jumper, rock climber, rodeo photographer, skier and ball player. Especially important to him were family and friend events like the annual Las Vegas trip with his buddies, the Our Gang Reunion Picnic in Wichita Falls and the Thanksgiving Celebration when all the family gathered for three days. Don was known for his wonderful sense of humor and fun. He was a son, brother, husband, father, grandfather and great grandfather. He had his first child at 25 and his fourth at 55. At age 65, Don had a stroke and struggled to live, to walk again, and to regain the use of his left arm and leg. He lived to see his youngest son, Travis, graduate from high school, become an Eagle Scout and become a nationally registered EMT. Just weeks before his death, his daughter, Breanna, graduated from U of Northern Colorado, the first member of his family to do so. A memorial service was held at The Dixon Chapel at Cherry Hills Community Church (CHCC) in Highlands Ranch, CO on July 19. Travis, Breanna, and Don's wife Carol shared reflections of their lives with Don. The funeral address was given by Adele Funk, Bible Study Fellowship, Teaching Leader and close family friend. Featured music was "Love Came Down" (Brain Johnson), 'Come Thou Fount' and 'Amazing Grace-My Chains Are Gone' (Chris Tomlin) performed by Greg Copeland (piano and vocals) and Lynda Fox Lieto (flute). Don was cremated according to his wishes and placed at the Cherry Hills Memorial Gardens, on the 'Lily' wall. His comment to family members prior to his accident was "There's a shelf there (at CHCC) with my name on it when I go." Don is survived by his wife Carol, his children, Allen (Lori) , Aaron (Kim), Breanna and Travis, grandchildren, Jake and Kendall, his mother, Jewell (101 years old), sisters, Betty (Jim) Lawder, Patsy (David) Davenport, Peggy (Eddie) Stolper, Pansy (Kenneth) Brown, brothers, Gary and Joe Paul, his first wife, Katie and many nieces and nephews. He was preceded in death by his father Sam and 2 brothers in law, David Davenport and Eddie Stolper.

The family of Donald S. Splawn created this Life Tributes page to make it easy to share your memories.

Send flowers to the Splawn family.