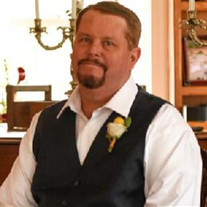 Dennis Lee Duryea, age 56 passed away peacefully at his home in Littleton on Thursday, February 25, 2021, after battling cancer for several years. He was born April 3, 1964, in Denver, to Dale and Irene (Smith) Duryea. Dennis was a 1982 graduate of Byers High School. He married Lori Penry on July 15, 1989 in Aurora, Colorado. Dennis worked in the family construction business. Upon his father’s death, Dennis and brother, Curt continued the family business until venturing out on his own as an independent contractor. Denny loved life and was always having fun. He enjoyed NASCAR, college basketball, shooting guns, and tinkering around his house. He entertained his daughter, nieces, and nephews with his many character voices—peals of laughter always followed when he pretended to be Donald Duck or Yoda. He adored his daughter and thought she could conquer the world. Some of his greatest joys were when Kristina graduated high school, college, earned her Master’s degree, and when she married the love of her life, Brock. Denny and Lori had the kind of marriage that was filled with laughter and love. Their marriage was full of visits to family, trips to Florida, and Washington DC. The last trip they were able to take as a family was to Hawaii. The family is grateful for this wonderful trip they were able to take together and for the memories they will always have of their time in paradise. Denny was preceded in death by his parents, Dale and Irene. He is survived by his wife, Lori; daughter Kristina (Brock) Costeldia, his brother, Curt; his two sisters, Gale and Deanne; and many nieces and nephews. Denny asks that in lieu of flowers, please make somebody’s day brighter with a smile and laughter. Formal donations can be made in Denny’s name to https://www.rockymountainbloodfund.org/ . Denny’s family will be holding a Memorial Service at Heflebower Funeral Services on March 4th at 10 am.

Dennis Lee Duryea, age 56 passed away peacefully at his home in Littleton on Thursday, February 25, 2021, after battling cancer for several years. He was born April 3, 1964, in Denver, to Dale and Irene (Smith) Duryea. Dennis was a 1982 graduate... View Obituary & Service Information

The family of Dennis Duryea created this Life Tributes page to make it easy to share your memories.

Dennis Lee Duryea, age 56 passed away peacefully at his home...

Send flowers to the Duryea family.