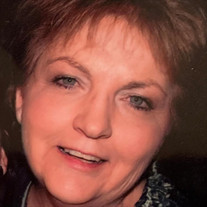 Debbie Henry, aged 71, passed away May 19 at Broomfield Skilled Nursing in Broomfield, Colorado. Her family was with her. She was born on October 12, 1949 to parents Tommye and Delbert. Donald Auch was her stepfather whom she knew as “Dad”. She was parented and loved on by others over the course of her life to include Jack and Charlene Cathy and Eugene and Betty Henry. She graduated from New Mexico State University with a teaching degree and taught school in Santa Fe and Roswell New Mexico for three decades before retiring to Colorado to be a grandma. She enjoyed trips to the mountains to go antiquing and to enjoy the scenery before suffering a stroke at age 59 which limited her but did not totally confine her. She loved teaching science and was very proud of her middle school science lab. When her son, Patrick, had his tonsils and adenoids taken out as a young boy she insisted they be given over as a specimen for her science lab and the surgeon was happy to oblige. She worked hard at teaching and won numerous awards at the state and national levels to include the Laureate Award as well as the Milken Award in 1994 (the Oscar or Grammy for teachers). She was an excellent teacher and grant writer. She procured land for outdoor education and attended several conferences and trips to include the Kennedy Air Force Base, Washington D.C, and Jackson Hole, Wyoming where she ran into Harrison Ford and stalked him for an afternoon. She was always particularly invested in reaching the most vulnerable students—the oddballs, outcasts, misfits, underdogs, and don’t-belongers. She worked in the computer lab after school and also worked summer sessions as well as night keeper at the Super 8 motel to be a provider for her family. She loved nothing more than being a mom to Patrick and Erin (who took good care of her in her later years) and especially being a Mema to Laighla Rose and Rhyker Eugene Ruberto. While her stroke and poor health limited her later in her life she was determined to live by her values and to hold on to her independence. She made regular trips to various places both on her own as well as to meet her family. She used public transport and her electronic wheelchair to go places to have fun with her family and to enjoy a life outside of her nursing home. She loved going to Modern Market to eat green chile and trips to Boulder with her kids and grandchildren. She was a wonderful roommate at Broomfield Skilled Nursing where she was a staff-favorite. There she brought light to a dark place and she was there to see several roommates leave this world for the next, always proud to have been there for them. She was proceeded in death by her parents Tommye, Delbert, and Donald as well as Jack and Charlene Cathy and Eugene and Betty Henry (inlaws). She is survived by and always thought of and loved her siblings Aggie, Rhonda, and Danny as well as Phil, Janet, Gary, Jan, Judy, and George (Cathey /Maloney family) and Tim, Janet, Tommy and Janette (Henry/Tidwell family) and Judi Morris. Her kids, Erin (and Matt) and Patrick and wife Carrie will greatly miss her as will her grandkids Laighla Rose and Rhyker Eugene. Her family will have a Celebration of Life ceremony for her later this summer where they will listen to Roy Orbison, sing hymns, eat Mexican food and drink margaritas in a pretty outdoor setting. In lieu of flowers please be kind to others, take care of the vulnerable, and pay any blessings forward.

Debbie Henry, aged 71, passed away May 19 at Broomfield Skilled Nursing in Broomfield, Colorado. Her family was with her. She was born on October 12, 1949 to parents Tommye and Delbert. Donald Auch was her stepfather whom she knew as &#8220;Dad&#8221;.... View Obituary & Service Information

The family of Debbie Henry created this Life Tributes page to make it easy to share your memories.

Debbie Henry, aged 71, passed away May 19 at Broomfield Skilled...

Send flowers to the Henry family.