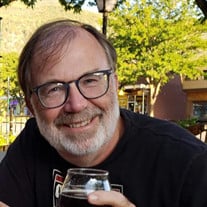 David Perry Schiefelbein passed away on Friday, January 21, 2022, at Porter Hospice in Littleton, Colorado. He was 68 years old. David was born to Perry and Vera (Larson) Schiefelbein on September 23, 1953, in Sisseton, South Dakota. He graduated from T.F. Riggs High School in Pierre, South Dakota in 1971. He received a bachelor’s degree as a PA (physician assistant) in 1982 from Wichita State University in Wichita, Kansas. Dave married Margi Ford in 1982; they divorced in 2014. His domestic partner of several years before his death was Sandy Loomis. David was a healthcare provider at various federal institutions, including the Federal Penitentiary and Veterans Administration Hospital in Leavenworth, Kansas and the Administrative Maximum Facility (ADX) in Florence, Colorado. Dave had a passion for fishing and took many fishing trips to Canada and Alaska with family and friends. He liked to garden and home brew beer. He enjoyed traveling and was able to visit Canada, Mexico, Honduras, and Belize with his partner Sandy before his death. Dave was preceded in death by his parents, Perry and Vera Schiefelbein. Dave is survived by his son Nathan (Kate Shippee) Schiefelbein and his daughter Hannah Schiefelbein. He is survived by his brother Brad (Deb) Schiefelbein; nephew Derek (Brittney) Schiefelbein and their children Carter, Quinn, and Bronson; niece Erin (Tyler) Jones and their children Slaton, Axl, and Cora; and niece Jenna Schiefelbein, also a PA, and her fiancé Barry Thompson. He is also survived by several cousins and his domestic partner Sandy Loomis, her son Ben (Camille) Marsh, and her daughter Erin (Shane) Neuville. No service is planned. Dave was a healthcare worker; please remember, thank, and appreciate our healthcare workers.

David Perry Schiefelbein passed away on Friday, January 21, 2022, at Porter Hospice in Littleton, Colorado. He was 68 years old. David was born to Perry and Vera (Larson) Schiefelbein on September 23, 1953, in Sisseton, South Dakota. He graduated... View Obituary & Service Information

The family of David Perry Schiefelbein created this Life Tributes page to make it easy to share your memories.

Send flowers to the Schiefelbein family.