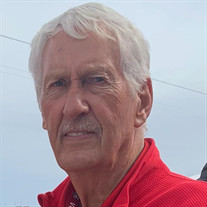 David Fredric Melton, age 74, passed away peacefully on December 18, 2021, surrounded in love by his wife of 52 years, Sandy Melton, and his two children, Matthew Melton and Heather Melton Fox. Dave was born on May 29th, 1947, to John and Martha Melton in Denver, Colorado. In 1965, he graduated from Hinkley High School in Aurora, Colorado where he was a star baseball and basketball player. He went on to play baseball on pitching scholarships throughout college and graduated from the University of Northern Colorado with a degree in education. In 1969 he married Sandy Longhofer. In 1972 their first child, Heather Ann Melton, was born. Five years later, they welcomed their son, Matthew David Melton. Dave made a 30-year career out of his life-long passion for teaching and coaching - the majority of which was spent at Hinkley High School. He was a very winning and successful coach. But nothing gave his work more meaning than including a student who felt excluded, or helping a young person reach the potential they couldn’t yet see in themselves. He was an excellent and avid golfer. After he left teaching, he secured for himself what he thought was the “coolest retirement job in history” with the Future Collegians World Tour (FCWT). For the next twenty years, he would get to play the best golf courses in the country “on the clock” and continue to mentor young people on the many lessons sports have to teach us about life. As a father, he and his wife instilled in their children the importance of standing up for fairness and justice and of treating everyone equally regardless of their particular circumstances. He lived his life in order to make the most room for the things that mattered most to him. He shared his pride in and love for his family and friends all of the time and for no particular reason. As a result, no one was ever left to wonder how much they meant to him. Dave loved to tell stories and make people laugh. His enthusiasm about life and his genuine interest in others made him fast friends with nearly everyone he met. But anyone who knew Dave for any length of time knows that nothing brought him and Sandy more pride and joy than their two grandsons, Cru and Beck. Walking on the beach in Mexico with Cru to gather “materials” for a fort and being “Monster Dave” at the constant request of Beck, made him as happy as anything in his entire life ever had. He will be dearly missed by all who knew him. He was preceded in death by his parents John and Martha Melton. He is survived by his wife Sandy Melton, his daughter Heather Melton Fox, his son Matthew Melton, Matt’s wife Eliane Ste. Marie, their two children Cru Melton and Beck Melton, sister Sally Melton, brother Tom Melton, sister-in-law Jill Melton, brother-in-law Carl Longhofer, sister-in-law Wynette Longhofer, as well as several nieces and nephews. Dave was one of the four people who started the original junior golf program in Aurora. Over the course of 20 years he taught countless kids, including his own two children, to play the game he loved. In lieu of flowers, memorial contributions may be made in Dave's name to the Paul McMullen Golf Scholarship Fund and sent to: City of Aurora Golf C/O Paul McMullen Golf Scholarship Program 15151 E. Alameda Parkway Suite #4600 Aurora, CO 80012. We want to support the safety and comfort levels of everyone who wishes to participate in Dave’s Celebration of Life. We will respectfully request that attendees adhere to the Jefferson County, CO mask mandate. To the extent possible, we will encourage social distancing. There will also be an outdoor heated space for people to gather after the service, and the service will be livestreamed on Facebook.

David Fredric Melton, age 74, passed away peacefully on December 18, 2021, surrounded in love by his wife of 52 years, Sandy Melton, and his two children, Matthew Melton and Heather Melton Fox. Dave was born on May 29th, 1947, to John and... View Obituary & Service Information

The family of David F. Melton created this Life Tributes page to make it easy to share your memories.