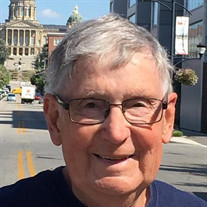 David Alan Groth, age 79 of Centennial, Colorado passed away peacefully on June 17th, 2019. David was born on May 27, 1940 in Des Moines, Iowa to the late Lucille and Irling Groth. Dave was raised in Des Moines where he attended Roosevelt High School graduating with the Class of 1958. Dave attended Iowa State University where he played basketball, was a member of the Phi Delta Theta fraternity and graduated with a degree in Industrial Administration in 1963. As an undergraduate, he participated in the Army ROTC and earned a commission as a Second LT, and was elected to the Cardinal Key Honorary Society. While at Iowa State, he also earned a Masters of Arts Degree in Psychology. Following graduation, he married the love of his life, Beverly Jane Miller. Following graduation, he and Beverly moved to Fort Bragg, NC, where he served at the Special Warfare Center as a Psychological Warfare Officer. Following the army, Dave earned his PhD in Higher Education from Michigan State University. His career included 15 years with two-year colleges in Illinois, Florida and Colorado. In 1985, he joined the administration of the University of Colorado where he held a number of different administrative positions at the Denver campus and in the President’s Office, Boulder campus, until he retired in 2000 as Vice President of Academic Affairs and Research, and received the University Medal. In retirement, Dave devoted much of his time mentoring at-risk students, including developing a pre-collegiate program designed to guide students toward college education. His other loves included tennis, golf and reading. He was especially proud of his book group of over 25 years. He loved spending time with his grandkids attending their various games and events and following his beloved Iowa State Cyclones. He and Bev enjoyed considerable travel mostly to Europe, but also to Latin and South America. He is survived by his wife of 54 years, Beverly Jane Miller of Shenandoah, Iowa. He is also survived by his sons, Todd Miller Groth and his wife Whitney and their two children, Graham and Mallory; Deon Alden Groth and his wife Lauri and their two children, Maggie and Miller, and Bryan Alan Groth and his wife Machelle and their son, Brennan. Dave loved the Lord and spent much of his time in Bible studies and fellowship with other Christians. He will be missed for his conversations and his dry sense of humor. In lieu of flowers, please feel free to donate to one of Dave’s favorite charities – Save Our Youth, Denver. https://saveouryouth.org/donate/

David Alan Groth, age 79 of Centennial, Colorado passed away peacefully on June 17th, 2019. David was born on May 27, 1940 in Des Moines, Iowa to the late Lucille and Irling Groth. Dave was raised in Des Moines where he attended Roosevelt High... View Obituary & Service Information

The family of David Alan Groth created this Life Tributes page to make it easy to share your memories.

Send flowers to the Groth family.