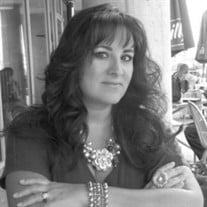 Danna Lea (Fisher) Fink, age 53, went home to be with the Lord on January 3, 2022, at St Anthony’s Hospital in Lakewood, Colorado. She was born October 23, 1968, in Joplin, Missouri to Dannie & Sheila Fisher. Danna was a graduate of Edmond Memorial High School, Edmond, Oklahoma. She received her bachelor's degree at Oklahoma Baptist University in Shawnee, Oklahoma and met her future husband there. She and Ed (Eddie) Fink dated four years and got married immediately following graduation. They were married 31 years this past July. Danna and Ed spent 5 years in business in Kansas City, and it was there that their two children, Danielle and EJ were born. They moved to Denver, Colorado where they became active in the Youth Ministry of Faith Bible Chapel-South for many years, eventually transitioning into senior positions. Danna obtained a master’s degree in education and enjoyed teaching 6th grade at Sedalia Elementary School for several years. Danna had a tremendous spirit of adventure and wasn’t afraid to try something new. She loved traveling and visited many foreign countries and different states. She especially loved the beaches and her visits to Disney World. She will be remembered for her tenacious love of life, her dedication to God and her love for her family. She invested in her friends, never met a stranger, and touched lives everywhere she went, often praying with people she had just met. Her legacy of caring for others will never be forgotten. Danna is survived by her husband Ed Fink, her daughter Danielle Butler, son-in law Makoto Butler, her son EJ Fink, daughter in law, Katherine Fink, and an adopted daughter Kezia Lawrence-Graham and her husband Jordan Lawrence-Graham who resides in England. Danna had one granddaughter from her son EJ, named Hazael Fink and one grandson on the way from her daughter Danielle. She is also survived by her parents, Dannie and Sheila Fisher, two sisters, Sharla Fisher and Nissa Newsome and brother-in-law Troy Newsome. She was beloved Auntie to Sicily Norman, Emma Newsome, Esmé Newsome, and Atticus Newsome. Also, beloved niece to her Aunt Sandra Smith, her Aunt Vicki Fields, Uncle Gary Fields, her Aunt Connie Stone, cousins Wesley, Sonia, Shera, Tessa, Cade, Kimberly, and Kenneth, and numerous other dear relatives and friends. Danna’s Celebration of Life Service will be at Faith Bible Chapel-South, 4250 S. Federal Blvd., Sheridan, CO. 80110, at 11:00 AM on January 15th, 2022, with a lunch following the service.

Danna Lea (Fisher) Fink, age 53, went home to be with the Lord on January 3, 2022, at St Anthony&#8217;s Hospital in Lakewood, Colorado. She was born October 23, 1968, in Joplin, Missouri to Dannie & Sheila Fisher. Danna was a graduate of Edmond... View Obituary & Service Information

The family of Danna Lea Fink created this Life Tributes page to make it easy to share your memories.

Send flowers to the Fink family.