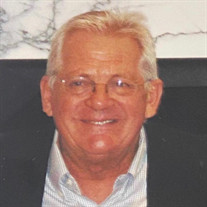 Dan Joseph Mitola of Evergreen, Colorado, died on May 9, 2020 at St. Anthony’s Hospital in Lakewood, Colorado due to complications from COVID-19. He was 80 years old. Dan was born in Portland, Oregon to Dan and Barbara Mitola. He graduated from the University of Notre Dame, where he played football for the Fighting Irish. After college, Dan was commissioned in the U.S. Army where he achieved the rank of First Lieutenant and was a Special Agent in the Counter Intelligence Corps. Dan moved to Annapolis, Maryland with his first wife, Carol Schork Mitola, and raised his three daughters: Amy, Ann, and Abby. In Annapolis, Dan worked for Arnie Gay as a yacht broker and later joined the Johns Hopkins Applied Physics Laboratory (APL) in the Submarine Technology Division. His work for APL included a stint on Jacques Cousteau’s Calypso. In 1990, Dan married Martha Peckover Fisher and relocated to the Florida Keys where he and Martha owned and operated the Seven Mile Marina. In 2012, Dan and Martha made Evergreen, Colorado their home. Dan lived a remarkable life – athlete, patriot, accomplished sailor and navigator, ocean explorer, and businessman. He sailed in numerous Bermuda Races. A spectacular athlete, he ran the Boston Marathon seven times. His best Boston Marathon time was 2:45, and he ran the Cherry Blossom Ten Miler in 0:59 minutes. Dan was a gifted storyteller, loving husband, father, and grandfather, and steadfast Catholic who always had a rosary on hand. Dan created adventure and fun in everything he did, whether fishing in the Keys, hiking in the Rockies, or pulling out his harmonica to play a tune. He enjoyed working on boats and sports cars and spending time with his faithful dog, Lucky Star. Dan will be remembered for his love of family, hearty laugh, and generous heart. Dan is survived by Martha, his devoted and loving wife of thirty years; and three daughters, Amy (Tony) Olmert, Ann (Rob) Pennington, Abby (Jamie) Hutchinson; and three stepsons, Kristian (Angie) Fisher, Stephen (Amy) Fisher, and Commander Justin (Jen) Fisher. Dan had eight grandchildren: Paige Pennington, Jack Pennington, Tony B. Olmert, Constance Olmert, Charlie Olmert, Caroline Hutchinson, Bear Hutchinson, and Annabelle Hutchinson; and six step-grandchildren: Ella Fisher, Althea Fisher, Mika Fisher, Bodhi Fisher, Kora Fisher, and Macy Fisher. Dan was preceded in death by his sister Marilyn MacLean Capri and survived by her six children and their families. A private ceremony will be held for the family at Bear Creek Cemetery in Evergreen, Colorado. Dan will be dearly missed.

Dan Joseph Mitola of Evergreen, Colorado, died on May 9, 2020 at St. Anthony&#8217;s Hospital in Lakewood, Colorado due to complications from COVID-19. He was 80 years old. Dan was born in Portland, Oregon to Dan and Barbara Mitola. He graduated... View Obituary & Service Information

The family of Dan Mitola created this Life Tributes page to make it easy to share your memories.

Send flowers to the Mitola family.