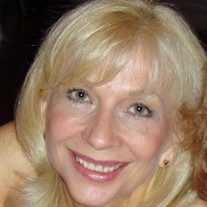 Cynthia Lucille (Ness) Renier, age 74, entered into Heaven peacefully on July 22, 2021 in Denver, Colorado with her family by her side after a very courageous bout with pancreatic cancer. She was the granddaughter of Italian immigrants Carlo and Josephine DeSalvo (who she shared the same birthday). Cynthia was born August 29, 1946 to Angeline (DeSalvo) Hensal and John Hensal who had two children, Jennifer and Cynthia. She felt much love and affection for her mother’s loving Italian family, for her aunts and uncles were the ones who “rocked her cradle”. Cynthia was a graduate of South High in 1964. Shortly after graduating, she married Melvin Ness who she met across the fence in her Aunt Pat’s backyard. They had two children, Melanie and Christopher. While raising them she completed her undergraduate degree in early childhood education from Southern Colorado State College in 1972. Later Cynthia went on to earn her master’s degree in Social Work from Colorado State University. Cynthia then became a licensed clinical social worker dedicating her career to helping trauma victims, the underserved, the misunderstood and the incarcerated. She worked for Del Amo Behavioral Health Systems in Torrance, California where she had moved with her second husband, James Renier (James’ children Quinn and William). They both were exploring new jobs in their fields. Cynthia would go on to say that was her favorite time in her career. Upon returning to Colorado, she would start her own private counseling practice, Interpersonal Services, LLC. Cynthia then would go to work for the Federal Government in the Denver Women’s Correctional Facility before retiring. She proudly served on the Board of the Colorado Association of Social Work. Cynthia was nominated for Social Worker of the Year in recognition for her significant contributions of service to the people of the Denver community. Cynthia led a very active life filled with all the activities she enjoyed with the people she loved. She loved family, first and foremost. Family was her everything. She loved holiday gatherings and Sunday dinners with her extended family, delicious Italian food, laughter and lots of love. Family tradition, the people of her family, and being together meant the world to her. She also liked cooking, baking, especially making birthday cakes, sewing Halloween costumes for the kids, collecting seashells on the beach, singing to the babies of the family, watching her grandsons play hockey, her Italian heritage, and her Catholic faith. She had an affinity for St Anthony, St Frances and the Blessed Virgin Mary. She also loved to write. Cynthia was writing a book called, Kisses to Make It Better, which she believed would be of great help to people facing addiction. Her book still is planning to be released. Cynthia also enjoyed cinema, going to the theatre and museums, walking and biking, playing board games and cards, going to the Farmer’s Market and being politically active with her partner of 15 years, James Dean. They liked to travel, especially to see his family; sisters and brother and their spouses, as well as his three sons, their wives and their seven grandchildren who she loved. Cynthia and Jim also liked spending time with their wonderful friends. She always had beautiful stories to tell of her time with family and friends for she enjoyed them all. Cynthia was a beautiful person, very special person. She had a very special way of loving people. She did it with heart, humor, kindness and acts of service. It was her gift to the world. And she touched many people throughout her life. She will be greatly missed by all who knew her. Cynthia will be remembered and cherished in our hearts. Cynthia is preceded in death her Mother Angeline (DeSalvo) Hensal and Father John Hensal, her sister Jennifer Cortner, along with many aunts and uncles who she loved dearly. She is survived by her children Melanie Ness and Christopher Ness, her grandsons Joshua and Dylan Ness. Also, survived by a niece Angela and nephew Stosh, cousins Grace and Sophie and numerous other cousins, all who she shared special relationships and loved dearly. Cynthia’s Memorial Mass will be held Thursday, August 5, 2021, with Rev. Michael Chrisman, at 10:00 a.m. at Shrine of Saint Therese, Pueblo, Colorado.

Cynthia Lucille (Ness) Renier, age 74, entered into Heaven peacefully on July 22, 2021 in Denver, Colorado with her family by her side after a very courageous bout with pancreatic cancer. She was the granddaughter of Italian immigrants Carlo... View Obituary & Service Information

The family of Cynthia Lucille Renier created this Life Tributes page to make it easy to share your memories.

Send flowers to the Renier family.