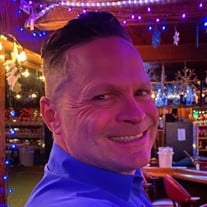 Curt Michael Connor "4 Lakes", age 54, returned to his heavenly home on Friday, February 19, 2021. He was born on February 12, 1967, to Gene and Yvonne Connor. Curt graduated from Marshall High School and received his Bachelor's Degree from the University of LaCrosse in Wisconsin. He then went on to study at Loras University in Iowa, where he received his Master's Degree. After meeting the love of his life, Curt and Melody married on July 15, 2005, where they moved and lived in Littleton, CO. After college, he went on to spend 18 years coaching men's college basketball teams. Curt mentored and pushed every single player to their highest potential and was considered a "Father" figure to many of them. Many of his players have gone on to lead successful lives. He was an assistant coach at Owens Tech in Toledo, Ohio, where his team won two national basketball championship titles back to back. Curt then moved on to Parkland Tech in Illinois. Not only did Curt become the Assistant Basketball Coach at Palm Beach Community College in Florida, he also was the Athletic Director and Head Men's Basketball Coach for Triton Community College in Illinois. After a few years at Triton, Curt took on the Head Men's Basketball Coach for the NCAA Division II at OPSU in Oklahoma. He then moved to Littleton, CO, where he landed his "semi-retired" job as an Assistant Facilities Supervisor for Highlands Ranch Recreation Center. Curt was a man of strong faith and had a genuine love for life itself. He was always "On Top of the World." Being in the mountains and surrounding himself in nature always made him feel closer to God. He was perpetually on the hunt to find new adventures and see things for the first time. He was passionate about trout fishing on the Colorado River, camping, hiking, concerts, parties, spending time with everyone he loved, and the Miami Dolphins. He was the Tour Guide of the Decade when it came to family and friends visiting Colorado. He will be dearly missed by all who knew him and his zest for life. Curt was preceded in death by his grandparents, Helen and Cyril Motl and Elmer and Aroline Conn0r of Marshall, Wisconsin, and many beloved relatives and friends. He is survived by his wife, Melody Connor, his parents Gene and Yvonne Connor, his sister Connie Campbell, his aunt and uncles Fran and Judy Klecker and Brian and Kathy Motl, along with many other beloved aunts and uncles, special nieces, nephews, cousins, friends, and co-workers. We ask that in lieu of flowers, please hold your loved ones tight. Love on the ones in your life, and never take each other for granted. Curt's family will be holding a Celebration of Life Service at Heflebower Funeral Services, Highlands Ranch, CO, on Monday, March 1, 2021 from 4-9 pm. Mass at St. Joseph Catholic Church, Golden Colorado, at 9 am on Tuesday, March 2, 2021. He will be laid to rest at Seven Stones Cemetery in Littleton, Co. Please feel free to stop by and share in the laughs, memories, and reminiscing of all the ways Curt touched your lives. We know this is what Curt would have wanted. https://www.heflebowerfuneralservices.com/ http://www.stjoegold.org/ http://www.discoversevenstones.com/ Hampton Inn & Suites Denver Littleton 7611 Shaffer Parkway, Littleton, CO, 80127, US https://www.guestreservations.com/hampton-inn-and-suites-denver-littleton/booking?msclkid=92ae6375ae8f1f521cce0340cbfdd5b8 Holiday Inn Express & Suites Denver SW-Littleton 3 stars12683 West Indore Place, Littleton, CO 80127 US https://www.reservationcounter.com/hotels/show/612539f/holiday-inn-express-suites-denver-sw-littleton-littleton-co/?cid=sem::TPRC::BA::Reservation%20Counter%20%3E%20US%20%3E%20West%20%3E%20Colorado::US%20%3E%20Colorado%20%3E%20Littleton%20%3E%20Holiday%20Inn%20Express%20%26%20Suites%20Denver%20SW-Littleton%20%3E%20did-612539f::holiday%20inn%20express%20littleton%20co::e&creative=79439758894662&device=c&utm_source=bing&utm_medium=cpc&utm_term=holiday%20inn%20express%20littleton%20co&utm_campaign=Reservation%20Counter%20%3E%20US%20%3E%20West%20%3E%20Colorado&iv_=__iv_m_e_c_79439758894662_k_79439828432112_w_kwd-79439828432112:aud-806128064:loc-4085_g_1271035585743610_n_o_e__h_93445_ii_44394_p_2_b_be_d_c_vi__&msclkid=4efa234655761a72e57e4373331f1ae9

Curt Michael Connor "4 Lakes", age 54, returned to his heavenly home on Friday, February 19, 2021. He was born on February 12, 1967, to Gene and Yvonne Connor. Curt graduated from Marshall High School and received his Bachelor's Degree from... View Obituary & Service Information

The family of Curt Michael Connor created this Life Tributes page to make it easy to share your memories.

Send flowers to the Connor family.