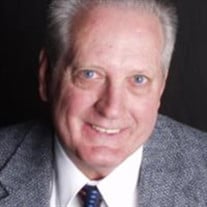 Doug Welborn, age 78, passed away on Thursday, March 10, 2022, at UC Health Highlands Ranch Hospital surrounded by his children and his grandchildren. He was born January 25, 1944, in Pascagoula Mississippi to Earl and Lena (Walters) Welborn. Doug was a graduate of the University of North Texas and met his wife Theresa of 54 years in Dallas Texas. They were married on April 22, 1967 in Branford Connecticut prior to his service in Vietnam as a Marine pilot. Devoted to his marriage and his family, Doug was always involved in making sure things were steady and secure. It was important to Doug to be a rock solid husband and father… he succeeded. Whenever a task, chore or routine errand was in order, a child would be in tow. Doug would use the magical, the day to day and the mundane to teach lessons to his children and grandchildren. Conversations were encouraged and always welcomed. Doug would always make time for his family and maintained prioritization of his family throughout his life. Doug embodied every positive characteristic of being a Man, a Father, a Husband and a Provider for his family. Doug was preceded in death by his parents; Earl and Lena, his brothers; David and Everet and his wife, Theresa. He is survived by his brother; William, his daughters; Tracy and Anna, his son; Del, grandchildren; Emily, Nick, Evelen and Trevor, son-in-law James, daughter-in-law Leneise, brother-in law; Joe, sisters- in-law; Mary Lou, Carolyn and Francine along with many nieces and nephews. Doug’s family will be holding a Celebration of Life Service at Littleton Cemetery on March 25, 2022 at 1:30 PM. A reception at the Littleton Elks Lodge will follow.

Doug Welborn, age 78, passed away on Thursday, March 10, 2022, at UC Health Highlands Ranch Hospital surrounded by his children and his grandchildren. He was born January 25, 1944, in Pascagoula Mississippi to Earl and Lena (Walters) Welborn.... View Obituary & Service Information

The family of Clarence Douglas Welborn created this Life Tributes page to make it easy to share your memories.

Send flowers to the Welborn family.