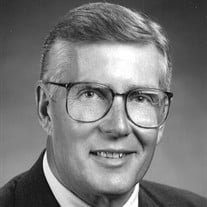 Charles Norman Thulin , 79 of Highlands Ranch, Colorado, went to be with his Lord and Savior, Jesus Christ, on February 28, 2018. Chuck and his twin brother Dave were born on March 31, 1938 in Kenilworth, IL to Earl and Ann Mary Thulin. Chuck attended New Trier High School in Winnetka, IL. He earned his B.S. degree in Business from Indiana University where he was a member of the Sigma Nu Fraternity, the Singing Hoosier and the Air Force ROTC. Chuck married Mary Richardson on June 4, 1960. While in the Air Force he served in Rapid City, S.D., and on the island of Guam. From Guam they enjoyed traveling to Japan, Hong Kong and the Phillipines. Following the Air Force, Chuck worked for American Life Insurance Company of Indianapolis. In 1970 they moved to Boulder, CO. where Chuck was a salesman for State Farm Insurance Company. Chuck served on the Board of the Boulder Chamber of Commerce and belonged to the Boulder Rotary Club. He was an avid pilot, taking many flights along the front range. He also obtained his helicopter license. Favorite vacation destinations included Sanibel Island, FL. And Breckenridge, CO. Chuck and Mary were members of First Presbyterian Church in Boulder for 30 years, where Chuck served as an usher and on the Board of Trustees. Chuck is survived by his wife Mary and their four children; Jill Thulin Lepetsos (Greg) of Littleton, CO., Jeff Thulin (Julene Faber) of Broomfield, CO., Rev. Ted Thulin (Tara) of Austin, TX, and Tom Thulin (Chris) of Highlands Ranch, CO. Eleven Grandchildren and two great grandchildren; Nicole and Andrew Lepetsos, David Marrs (Destiny), Brandon and Amber Thulin, Kyle, Peyton and Holly Thulin, Annie, Rylie and Michael Thulin and Natalie and Madelyn Marrs. He is also survived by his sister Gene Pierce and brother Dave. Memorial Services will be 10 AM Wednesday, March 7, 2018 at First Presbyterian Church , 1820 15th Street, Boulder, CO 80302. Memorials In honor of Chuck are suggested to his son Ted’s church plant; The Vine, 5424 West Hwy 290, Austin, TX 78735.

Charles Norman Thulin , 79 of Highlands Ranch, Colorado, went to be with his Lord and Savior, Jesus Christ, on February 28, 2018. Chuck and his twin brother Dave were born on March 31, 1938 in Kenilworth, IL to Earl and Ann Mary Thulin. Chuck... View Obituary & Service Information

The family of Charles N. Thulin created this Life Tributes page to make it easy to share your memories.

Send flowers to the Thulin family.