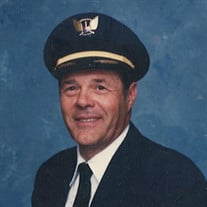 Casimir “Casey” Walker – age 85 – was born on 11-30-1934 in Chicago, IL. He died on 6-8-2020 in Highlands Ranch, CO from a brain hemorrhage. The son of Stella Putyra and Casimir Walkowiak, Casey was raised near Midway Airport which probably explains his love of flying. He graduated from Lindblom High School in 1953 and joined the Army the same year, serving in Korea. Casey was able to learn to fly on the GI bill and was hired by United Airlines in 1959 as a ticket agent at Midway Airport. In 1961, he was hired as a flight engineer in Chicago. His favorite airplane was the Boeing 727. He retired on 12-1-1994 from flying as a captain on the 757/767 with 35 years at United – 34 of those years in Denver. In addition to his love of flying, he enjoyed volunteering at Castlewood Canyon State Park, participating in paleontology digs and playing golf. Casey married Gail Shannon, a United stewardess, in January of 1962 in Minneapolis, MN. They traveled extensively, including 80 countries and all 7 continents. They lived in Franktown, CO for 45 years before moving to a retirement community in Highlands Ranch 6 months ago. Survivors include: wife, Gail; daughters, Debbie (Patric) Bensinger and Susanne Walker; grandchildren, Stephanie (Kurt) Lemmen, Heather Spencer, Aidan, Keeler, and Kenley Sparks; brothers, Dan Walker and Ken Wukovits; and aunt, Laura Kochem. Join us in a Celebration of Life luncheon for Casey after the Fort Logan service. Please bring your pictures, stories, and memories for sharing. The Celebration will take place at Wedgewood Ashley Ridge Event Center - 8199 Southpark Court, Littleton, CO 80120. (720) 449-3728

The family of Casimir "Casey" Walker created this Life Tributes page to make it easy to share your memories.

Send flowers to the Walker family.