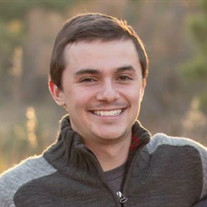 In lieu of flowers, the family prefers donations to The Denver Dumb Friends League @ www.ddfl.org, Donor Alliance @ www.donoralliance.org, or The Nature Conservancy @ www.nature.org Casey Lewellyn McDonnell was born on June 14, 1995 in Aurora, Colorado, and grew up in Castle Pines North. Tragically, he passed away on February 7, 2017. He was a brilliant, self-taught computer engineer and designer who was passionate about his work at Charter Communications. As a software Engineer in the Advanced Engineering Department, he was known for his ability to solve complex problems easily. Casey also loved his time camping in the great outdoors, was an avid gamer, played the guitar beautifully and loved all types of music. He had a great sense of humor and was a special big brother to all of his siblings and friends. Casey is survived by his mother, Heidi Lewellyn, his father, Michael Craig McDonnell, his step-mother, Ann Marie McDonnell, his brothers, Wayde & Logan, his sisters, Meredith & Aspen, his Fiancé, Ally Jackson, as well as many life-long friends, extended family and his dog, Tank.

The family of Casey Lewellyn McDonnell created this Life Tributes page to make it easy to share your memories.

In lieu of flowers, the family prefers donations to The Denver...

Send flowers to the McDonnell family.