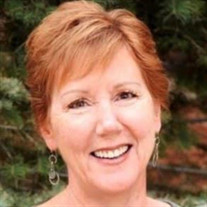 Carolyn Willcox Burtard, 68, of Centennial, CO passed away in her home on August 11, 2020. Our world lost a strong, adventurous, vibrant woman to complications due to melanoma cancer, the same disease that took her father. Carolyn was born June 28, 1952 in Queens, NY. She spent her childhood on Long Island, New York. She grew up on the beach and on boats. She moved west to Salt Lake City as a teenager but kept connected to the east coast through family. In 1974 she graduated from Brigham Young University with a degree in Business Home Economics with a Food Science emphasis. Since college, Carolyn was always in sales. Her first jobs were designing and selling kitchen cabinets and appliances. The largest chunk of her corporate career was 15 years with Parke-Davis (now Pfizer). She had a Utah territory for 2 years and was relocated to Denver as a manager in 1984. She was the second female manager in the history of the company and was a district manager for 13 years. During that time, at some point she covered most of the western US except So. California and Texas. She accumulated LOTS of frequent flier miles! Carolyn left Parke-Davis in 1997 due to reorganization. She then spent time recruiting IT professionals and salespeople – rode the Y2K wave; she sold home health services to physicians for high risk pregnancies; and eventually became a business owner. In 2004 she opened 2 franchise fitness facilities for women in Highlands Ranch. That’s when she learned about a nutrition supplement called Juice Plus+. After closing the fitness facilities in ‘08, she focused on sharing Juice Plus+ as well as Norwex cleaning products. Carolyn is preceded in death by her parents, Alfred Norman Willcox and Ruth Ann Fuller, her brothers Eric Willcox, Gary Owen Willcox and Scott Allen Willcox, as well as her husband of 25 years, Douglas Alan Burtard. Carolyn and Doug married later in life and only had fur babies of the barking kind, Chester followed by Jazzper. Their life included travel all over the US and to 35 foreign countries – they used those frequent flier miles well! She was a scuba diver, an amazing cook, a food gardener, and loved to entertain! Carolyn gave back to her communities with volunteer work and has served on a variety of Boards. She was active in her homeowners association, the Northwest Douglas County Chamber, the CA$H group, and the Colorado Trail Crew. She made close friends wherever life took her. She treasured her numerous friendships and enjoyed tremendous support from those she called the “Village.” Carolyn is survived by her sister, as well as adoring nieces, nephews, grandnieces, and grandnephews. Carolyn was highly organized, passionate, and successful at all she set out to accomplish. She was truly an amazing woman who will be missed by many.

Carolyn Willcox Burtard, 68, of Centennial, CO passed away in her home on August 11, 2020. Our world lost a strong, adventurous, vibrant woman to complications due to melanoma cancer, the same disease that took her father. Carolyn was born... View Obituary & Service Information

The family of Carolyn Willcox Burtard created this Life Tributes page to make it easy to share your memories.

Carolyn Willcox Burtard, 68, of Centennial, CO passed away in...

Send flowers to the Burtard family.