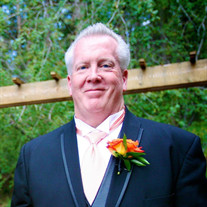 Brian Robert Clarke, a longtime resident of Highlands Ranch, CO, passed away at Highline Place in Littleton Colorado on Saturday, April 11, 2020 at the age of 67, after fighting a long battle with early-onset Alzheimer's Disease. He was preceded in death by his parents William and Margaret (Walsh) Clarke, to whom he was a caring and dedicated son. Brian is survived by his loving wife of 38 years, Joan (Hesser) Clarke, and his four children: Jeffrey Clarke, married to Amy; Allison (Clarke) Aguilar, married to Drew; Carolyn (Clarke) Brown, married to Chris; and Michael Clarke. The proud grandfather of Kylie (16), Everlie (8), Austin (5) and Hunter (3), Brian will be lovingly remembered as their wonderful PopPop. Brian is also survived by his devoted sister Diane Raybuck, brother-in-law Gregg, their three children, Carlie, Alex and Megan, and his uncle, Robert Clarke. He also leaves behind many beloved members of his extended family. Brian’s loved ones will forever remember and respect him as hard-working and dedicated to his entire family. Brian spent his 38-year career working in the telecommunications industry, which relocated his family in 1991 from his birthplace of Philadelphia, PA to Highlands Ranch, CO. As a man with a generous spirit and many self-taught skills, he enjoyed working on home improvement projects, sharing his time, talents and resources with anyone in need, volunteering at church, and supporting/coaching his four children in their varied interests. He also had a deep appreciation for music, an affinity for fast cars, an insatiable appetite for sweet treats, and especially loved his two dogs, Gracie and George. Though he faced many new challenges when his life was suddenly detoured in his mid-50’s, Brian continued to push forward and experience life. He walked countless miles with his beloved furry friends, participated in family events and vacations, attended car races and sporting events, developed new friendships, went on regular educational trips and outdoor excursions throughout the Denver area, hiked in nature, welcomed more grandchildren, continued to enjoy a wide array of music, and eventually discovered a new singing voice which brought joy to all who had the honor of hearing him sing. As he courageously traveled to his final destination, he was overseen and gently guided by many who knew and cared for him. The family would like to extend their deepest thanks for the love and respect shown to Brian by all those who supported him during his journey. Though Brian will be deeply missed by all who knew and loved him, his family finds solace in knowing that he is finally at peace, reunited with those who went before him and will be watching over those he has left behind from his eternal home. In consideration of the current COVID-19 pandemic, memorial arrangements to celebrate his life will be made at a later date. In lieu of flowers, the family requests donations to a charity of your choice in Brian’s honor. A few charities close to his heart: https://www.lifecenterlittleton.org/donate/ https://www.autism.org/donate-autism-research-institute/ https://www.alzinfo.org/donate/donation_form/

Brian Robert Clarke, a longtime resident of Highlands Ranch, CO, passed away at Highline Place in Littleton Colorado on Saturday, April 11, 2020 at the age of 67, after fighting a long battle with early-onset Alzheimer's Disease. He was preceded... View Obituary & Service Information

The family of Brian R. Clarke created this Life Tributes page to make it easy to share your memories.

Send flowers to the Clarke family.