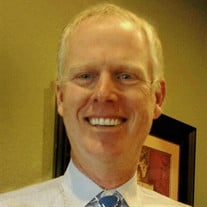 Brent Alan Lail, 53, of Castle Rock, CO (formerly of St. John, IN and Frankfort, IL) died unexpectedly at home on May 29th, 2015. Brent is survived by his wife Carol, their three sons, Evan (17), Brandon (15), Garrett (12), daughter Brooke (27) of Indianapolis, IN; brother Thomas Lail of Honolulu, HI; sister Marie Lail Blackburn of Seattle, WA; sister Denise (Randy) Purkey of Lowell, IN; in-laws Linda and Charles Miller of Hartland, WI; many family members, and numerous friends and colleagues. Brent was preceded in death by his parents, Tom and Tommie (Nurisha) Lail and brother, John Eric Lail, all of St. John, IN. Brent’s reputation as a role model and outstanding leader began early in his life as he led his Indiana high school basketball team to numerous victories, earning awards for the team and a college basketball scholarship for himself. In his business career, he rose from sales and management positions, to head national sales teams where he became a trusted mentor, coach, and leader. Brent challenged his team members to think differently each day and he inspired all who knew him to do more and be more. At DEX, his most coveted position was Vice President and Dean of the Sales Training Academy, where he was able to influence the greatest number of people while transforming the DEX sales process and skill levels in the entire company. Most recently, Brent worked for the Zenith Education Group as the Vice President of Contact Center Operations. He treated all people well, lived by the Golden Rule, believed in God, loved his family and friends, and had a brilliant and hilarious sense of humor. Brent was beloved by all and will be missed forever. Services for Brent will be held Friday morning, June 5th, at 10:30 am at St. Francis of Assisi Catholic Church, 2746 5th Street, Castle Rock, CO, 80104-1824. Catholic mass will commence at 10:30 am, followed by a memorial and eulogy, with a reception immediately after. A Celebration of Life reception for Brent will be held Friday, July 10th, from 1-4 pm at Centennial Park, 900 North Centennial Drive, in Munster, IN. In lieu of flowers, and because many have asked, donations can be made either to support the children’s college funds or to Brent and Carol’s special charity, the Epilepsy Foundation of Colorado. For college fund contributions, please contact Edward Jones representative Lana Stewart at 303-790-7412. Epilepsy Foundation donations can be made in Brent’s name at www.epilepsycolorado.org.

The family of Brent A. Lail created this Life Tributes page to make it easy to share your memories.

Send flowers to the Lail family.