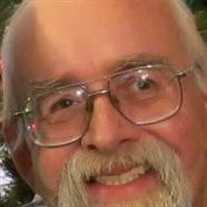 Bradley Dean Clark died at home with family, at the young-at-heart age of 61, the result of liver cancer, on June 5, 2019. He was born on January 7, 1958, in Moscow, ID and had the great fortune of being adopted as an infant by Lorene (Lori) Davis Clark and Frank Clark of Lewiston, ID. His greatest love from a very young age was music and before he could walk, he would crawl to the console stereo to show his parents he wanted to hear a record. His early elementary years were spent in Portland, OR attending St. Helen’s Hall, now known as Oregon Episcopal School, during which he made great strides while studying piano under Elesa Scott Keeney. He returned to Lewiston, ID in 5th grade for the rest of his schooling and his favorite memories were of high school marching band, wind ensemble, a jazz band trip to Europe, and working on theatre productions. The marching band played at the parade for Richard Nixon’s inauguration. He played piano, organ, trumpet and tuba. During those years his favorite musical mentor was his high school band teacher, Eddie Williams. It was during his time in high school that he accepted Jesus Christ as his Lord and Savior. During his late adult life, he became involved in Celtic paganism and later rededicated his life to Christ in 2018. Brad attended Lewis and Clark College in Portland, OR to study music and toured Europe with the college choir. However, he left during his junior year in 1977 to join the Navy. He married Marna Frerichs of Portland, OR after basic training. He was stationed in Puerto Rico at the US Naval Security Group Activity (NSGA) Sebana Seca base. He was very proud that he was able to serve in the Navy and obtain the security clearance that enabled him to intercept and record Morse code signals of unfriendly governments during his work as a cryptologic technician CTR3. On December 3, 1979, Brad was en route to a day watch to a remote radio transmitter site in a Navy bus with 17 other unarmed Navy personnel passengers. The bus was forcibly stopped by two vehicles containing members of the militant separatist group, Los Macheteros, who then sprayed the bus with AK-47 and M16 machine gun fire. Two sailors were killed, and ten wounded, including Brad who was shot in the aorta and the liver. Through surgery done by Vietnam-field trained Veteran’s Administration surgeon Herman Mendez, Brad survived. Brad always felt he would not have survived under anybody else’s care and held Dr. Mendez in great esteem. Brad’s rehabilitation was long and difficult, and he was discharged from the Navy with a Purple Heart in 1980. After his marriage ended, he lived in Portland, then Lewiston, and finally settled in Phoenix, Arizona. During this time, he reconnected with a college friend, Deborah Stroschein of Minneapolis, MN, and married her in 1984. They were married 34 years at the time of his death. Brad attended DeVry University in Phoenix and began to work as a software programmer for AMD in San Jose, CA, then Blue Cross/Blue Shield in Lewiston, and finally Trizetto in 2000 after settling in Denver, CO. During his years in California, he played keyboards with the band, Big Daddy Blue. Brad lost his IT job during the dot.com bust and later held various jobs before retiring in 2011. During these years he and Debbie had three wonderful daughters, Catherine, Hannah, and Rebecca Clark. Brad loved his wife and daughters, was very proud of his family and felt blessed by their presence in his life every day. Brad involved himself in many of his daughters’ activities. He coached soccer teams, built AWANA grand prix cars, traveled for track meets, supported his daughters in all their high school theater endeavors. He was available at a moment’s notice for hugs or whenever "daddy taxi" was needed. He was passionate about creating radio programs for the W0kie Satellite Radio Network and the internet streaming service RadioFree Dishnuts, under the monikers “Brad the Impaler," “Club Impaler," and “DJ Dacron Polyester” among others. He also served as program director for the W0kie network. He used Internet Relay Chat (IRC) to keep in touch with other participants and appreciated all the cohorts in these endeavors, radio friends and friends made across the country because of his diverse interests. He also was a Ham Radio enthusiast operating under NP4AI. He followed the Seattle Seahawks, loudly rooted for the Newcastle United soccer team, and enjoyed watching cricket and curling. He restored old radios and loved to hunt down trains to take photos of them. But the thing he loved the most was music. He was a prolific collector of albums, 45s, 78s, wax cylinders, and some records dating back to the 1910s. His collection numbered in the tens of thousands and he created multiple streams of music for anybody to listen to under his Tin Foil Hat Radio banner. His absolute favorite hobby was to take old recordings and restore them by cleaning them up and digitizing them so others could enjoy them. Brad was preceded in death by his father Frank Clark, and stepfather Edward L. Strand. He is survived by his daughter, Catherine Clark Bradway, and son-in-law, Jarryd Bradway; daughter, Hannah Clark Wirth, and son-in-law, Jacob Wirth; and daughter, Rebecca Clark. He is also survived by his mother, Lori Strand, and stepmother, Myrla Zollman Clark. A private service has been held at Fort Logan National Cemetery and the family was blessed by the good work of the volunteer Navy honor guard and the chaplain who honored Brad. The family wishes to thank Agape Hospice for all their support and care during Brad’s time of need. Also, for the care of Rocky Mountain Cancer Center and especially of Colorado Blood Cancer Institute, and the nurses on ward 4B at Presbyterian St. Luke’s Hospital.

Bradley Dean Clark died at home with family, at the young-at-heart age of 61, the result of liver cancer, on June 5, 2019. He was born on January 7, 1958, in Moscow, ID and had the great fortune of being adopted as an infant by Lorene (Lori)... View Obituary & Service Information

The family of Bradley Dean Clark created this Life Tributes page to make it easy to share your memories.

Bradley Dean Clark died at home with family, at the young-at-heart...

Send flowers to the Clark family.