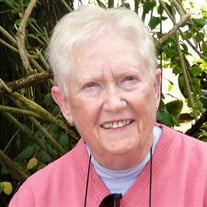 Billie Charlene Swenson (nee Jones), 87, passed away at her home in Highlands Ranch on November 16, 2019 with her family by her side. She had Alzheimer’s disease and congestive heart failure. Billie was born in Lebanon, Missouri July 21, 1932 to Minnie Agnes and Charles Otto Jones, the second of four children. She graduated from Marshfield High School in 1950. Billie trained with the Army Mapping Service in stereo cartography while living in Kansas City and later worked with a private firm in Idaho in that field. Billie married the love of her life, Patrick Nolan Swenson, August 17, 1957 at Turner Air Force Base in Georgia and began her globetrotting, moving to wherever her husband was stationed with the Air Force. She lived in Japan, Germany, Italy and England. Travel and living in other countries was one of her passions, and she visited over 30 countries throughout her life. She loved learning about other cultures and meeting people from all over the world. Billie’s final trip was in 2018 to England to visit friends. She lived in Golden, Colorado from 1974 to 2018, where she worked first as a draftsman for Jefferson County and later as the director of the mapping department. Under Billie’s leadership, the department was one of the first in the country to digitize maps. After retiring in 1995, she and Pat travelled the world, often with her beloved sister Bonnie and her husband Rich, visiting places like Russia, Nepal, Thailand, and Costa Rica. There was no adventure that Billie wasn’t up for, including rafting the Royal Gorge, parasailing in Ecuador, and sky diving on her 70th birthday. Her retirement allowed her to spend lots of time spoiling her grandchildren. Tea parties, play doh and making tracks for Tonka trucks filled her time with her grandchildren. Billie was preceded in death by her parents, her sister Bonnie Viertel, and her brother Stephen Jones. She is survived by her husband, her children Peter Swenson (Maria) and Suzi Mishmash (Randy), her grandchildren Nick and Jake Swenson and Elise and Paige Mishmash, her brother CO Jones, her niece Deborah Greene, great nephew Adam Greene and many other nieces and nephews. Billie’s graveside service will be Wednesday, November 27 at 11:30 at Fort Logan National Cemetery. Reception details to follow. Memorial contributions can be made to the Alzheimer’s Association. Email remembrances can be sent to [email protected] Funeral arrangements and online at Heflebower Funeral and Cremation Services.

Billie Charlene Swenson (nee Jones), 87, passed away at her home in Highlands Ranch on November 16, 2019 with her family by her side. She had Alzheimer&#8217;s disease and congestive heart failure. Billie was born in Lebanon, Missouri July 21,... View Obituary & Service Information

The family of Billie C. Swenson created this Life Tributes page to make it easy to share your memories.

Billie Charlene Swenson (nee Jones), 87, passed away at her home...

Send flowers to the Swenson family.