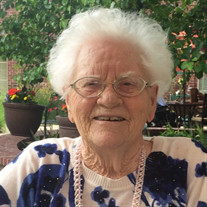 Alice Norma (Jahr) Nickoley Alice Norma Jahr was born March 31, 1920 at home in Highland Grove Township near Hitterdal, Minnesota to Olof and Severina “Susie” (Quam) Jahr. She was baptized and confirmed at Salem Lutheran Church in Hitterdal. She graduated from Hitterdal High School in 1938. She attended Dakota Business School in Fargo, North Dakota. Alice worked as a secretary for the Selective Service System’s Draft Board Office in Minnesota in the 1940s. After World War II, she moved to Colorado. She joined Our Savior’s Lutheran Church in Denver, where she met Frank W. Nickoley; they were married there on August 17, 1947. The couple remained in the Denver area and raised their family in Edgewater. Grateful for her life are her children, Paul Stevan (Nancy) of Highlands Ranch, Ronda Sue of Platteville, and Bruce David (Marty) of Evergreen. Alice was affectionately called “Nan” by her beloved six grandchildren, Scott, Todd, Karl, Jesse, Calvin and Julie and three great grandchildren, Damon, Donovan and Dylan. Alice’s profession for fifty years was as a secretary, working in church offices, the Denver office of the Chicago, Burlington & Quincy (CB&Q) Railroad, Lutheran Social Services, and the Colorado State Labor and Employment Department. In 1981, Alice and Frank retired to Estes Park, Colorado. After 57 wonderful years of marriage, Frank passed away in 2004. Most recently, Alice lived at Littleton Life Care Center. Alice Nickoley was the sole surviving sibling of her generation, and is preceded in death by her parents, Olof and Susie, sister, Rhoda U. Jahr, and brothers Odin, Stanton, Corliss, Lowell and Donald.

The family of Alice Norma Nickoley created this Life Tributes page to make it easy to share your memories.

Send flowers to the Nickoley family.